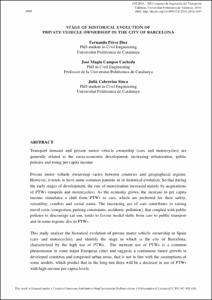 Transport demand and private motor vehicle ownership (cars and motorcycles) are generally related to the socio-economic development, increasing urbanization, public policies and rising per capita income. Private motor vehicle ownership varies between countries and geographical regions. However, it tends to have some common patterns in its historical evolution. So that during the early stages of development, the rate of motorization increased mainly by acquisitions of PTWs (mopeds and motorcycles). As the economy grows, the increase in per capita income stimulates a shift from PTWs to cars, which are preferred for their safety, versatility, comfort and social status. The increasing use of cars contributes to raising travel costs (congestion, parking constraints, accidents, pollution), that coupled with public policies to discourage car use, tends to favour modal shifts from cars to public transport and in some regions also to PTWs. This study analyze the historical evolution of private motor vehicle ownership in Spain (cars and motorcycles), and identify the stage in which is the city of Barcelona, characterized by the high use of PTWs. The increase use of PTWs is a common phenomenon in some major European cities and suggests a continuous future growth in developed countries and congested urban areas, that is not in line with the assumptions of some models, which predict that in the long-run there will be a decrease in use of PTWs with high income per capita levels.
CitationPérez Díez, F., Campos, J.M., Cabrerizo Sinca, J. Stage of historical evolution of private vehicle ownership in the city of Barcelona. A: Congreso de Ingeniería del Transporte. "XII Congreso de Ingeniería del Transporte 7, 8 y 9 de junio Valencia (España): libro de actas/proceedings". Valencia: Universitat Politècnica de València, 2016, p. 2085-2122.
URIhttp://hdl.handle.net/2117/96434
DOI10.4995/CIT2016.2016.3497
ISBN978-84-608-9960-0
Publisher versionhttp://ocs.editorial.upv.es/index.php/CIT/CIT2016/paper/view/3497