An interior - point algorithm for hyper-plastic models for soils 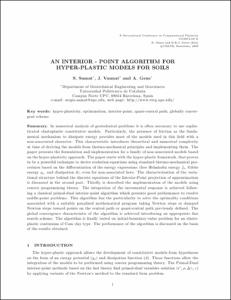 Document typeConference report
Rights accessOpen Access
Abstract
In numerical analysis of geotechnical problems it is often necessary to use sophisticated elastoplastic constitutive models. Particularly, the presence of friction as the fundamental mechanism to dissipate energy provides most of the models used in this field with a non-associated character. This characteristic introduces theoretical and numerical complexity at time of deriving the models from thermo-mechanical principles and implementing them. The paper presents the formulation and implementation for a family of non-associated models based on the hyper-plasticity approach. The paper starts with the hyper-plastic framework, that proves to be a powerful technique to derive evolution equations using standard thermo-mechanical procedures based on the differentiation of the energy expressions (free Helmholtz energy fs, Gibbs energy gs, and dissipation d), even for non-associated laws. The characterization of the variational structure behind the discrete equations of the Interior-Point projection of approximation is discussed in the second part. Thirdly is described the implementation of the models using convex programming theory. The integration of the incremental response is achieved following a classical primal-dual interior-point algorithm which presents good performance to resolve saddle-point problems. This algorithm has the particularity to solve the optimality conditions associated with a suitably penalized mathematical program taking Newton steps or damped Newton steps toward points on the central path or quasi-central path previously de ned. The global convergence characteristic of the algorithm is achieved introducing an appropriate line search scheme. The algorithm is finally tested on initial-boundary-value problem for an elastoplastic continuum of Cam clay type. The performance of the algorithm is discussed on the basis of the results obtained.
CitationSamat, S.; Vaunat, J.; Gens, A. An interior - point algorithm for hyper-plastic models for soils. A: International Conference on Computational Plasticity. "X International Conference on Computational Plasticity". Barcelona: 2009, p. 1-4.
URIhttp://hdl.handle.net/2117/9634
ISBN978-84-96736-69-6
Collections
Share: