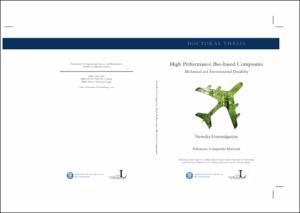 ; Joffe, Roberts
CovenanteeLuleå tekniska universitet
Chair / Department / Institute
Universitat Politècnica de Catalunya. Departament de Ciència dels Materials i Enginyeria Metal·lúrgica
Document typeDoctoral thesis
PublisherUniversitat Politècnica de Catalunya
Rights accessOpen Access
Abstract
The presented work is a part of the ongoing effort on the development of high performance bio-based composites with enhanced durability, under static and dynamic mechanical loading including the exposure to elevated humidity. The impact of relative humidity on the performance of cellulosic fibers (natural and regenerated), bio-based resins and their composites was studied. The material performance was rated against the data for glass fiber epoxy, as the reference. The comparison of water absorption results for unreinforced resins and for composites showed that the cellulosic reinforcement is primarily responsible for the transport and uptake of moisture in the composites. The effect of chemical treatment on the cellulosic fibers, as a protection against moisture, was evaluated. However, the treatment did not improve the moisture resistance in composites significantly. Quasi-static tensile tests revealed that some of the bio-based resins and their composites performed very well and comparable to the composites of synthetic epoxy, even at high humidity. However, any structural material is supposed to hold mechanical loads over a long service time and most often in harsh environmental conditions. Hence, tension-tension fatigue tests were performed on the fiber bundles as well as on the composites. The fibers of choice as the reinforcement for further mechanical testing were regenerated cellulose fibers (RCF), mainly owing to the stable geometry and properties. Due to the high nonlinearity of RCF, the fatigue tests were limited in number and the focus was on analyzing the mechanisms underlying the fatigue behavior rather than on constructing S-N curves. Strain evolution of the bio-based composites during the dynamic fatigue was very similar to that observed in the static fatigue (creep). It confirmed the strong influence of viscoelastic and viscoplastic phenomena on the overall performance of the material under the rapid loading conditions in fatigue. Since the durability of composites greatly depends on the material¿s ability to stand the internal damages (e.g. debonding, microcracking, delaminations), the interfacial properties in the bio-based composites were addressed. To investigate the fracture toughness of bio-based composites, the double cantilever beam (DCB) tests were carried out, under static and dynamic loading. Moreover, the DCB results were utilized as a measure of the fiber chemical treatment¿s efficiency to improve the adhesion between RCF and the resin. The nonlinearity of RCF strongly influenced the results obtained from DCB tests, which complicated the analysis regarding the effectiveness of the fiber surface treatment. Nevertheless, this study brings forward the issues that have to be dealt with, in order to characterize and predict the performance of these composite materials with highly nonlinear reinforcing fibers. Overall, the results presented in this thesis give an insight into the behavior of bio-based composites, at various environments and under different types of mechanical loading. Based on these findings, the potential use of these materials in structural applications can be assessed
Description
Cotutela Universitat Politècnica de Catalunya i Luleå tekniska universitethttp://pure.ltu.se/portal/en/publications/high-performance-biobased-composites(9f34c277-ced2-4332-aaf0-22e09c997264).html
CitationDoroudgarian, N. High performance bio-based composites : mechanical and environmental durability. Tesi doctoral, UPC, Departament de Ciència dels Materials i Enginyeria Metal·lúrgica, 2016. Available at: <http://hdl.handle.net/2117/96308>
URIhttp://hdl.handle.net/2117/96308
Collections
Share: