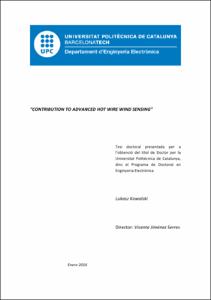 Chair / Department / Institute
Universitat Politècnica de Catalunya. Departament d'Enginyeria Electrònica
Document typeDoctoral thesis
PublisherUniversitat Politècnica de Catalunya
Rights accessOpen Access
Abstract
The thermal anemometry is a method which allows to estimate wind magnitude be the mean of measuring heat transfer to the ambient in a forced convection process. For Earth's atmosphere condition, this method is typically applied to the hot wires made of temperature dependent electrical conductor, typically platinum or tungsten, which working with overheat in reference to the ambient temperature estimate wind velocity. In case of the low pressure atmospheres, like this on Mars, the mean free path for molecules, due to the rarefied ambient conditions, is much bigger, Using hot wires designed for Earth in this conditions gives that heat exchange at macroscopic scale which does not to obey medium continuum model but rather reveals ballistic behavior Thus, instead of using hot wire, a structure of bigger dimension like hot films are usually propose for such a kind of application. The work included in this thesis is the contribution of the author Lukasz Kowalski to the goal of developing a new generation of wind sensors for the atmosphere of Mars. The work consists in the conception, design, simulation, manufacture and measurement of two novel types wind sensors based on thermal anemometers. The first kind of concept has been developed in this thesis by using hot silicon die made out of silicon wafer of approximate size: 1.5 x 1.5 x 0.5 mm with platinum resistances deposited on top in order to heat it and sense its temperature. These work was been a part of the bigger undertaking under the project name: "Colaboracíoon en el desarrollo de la estación medioambiental denominada REMS ". Inside the project REMS author of thesis was responsible for sensor shape development and concept validation of proposed geometry. Thermal-fluidical model of the device as well as characterization and behavior were analyzed for a simplified 2-D wind model for typical Martian atmospheric conditions. REMS was a Spanish contribution to the NASA mission MSL which has been a great success since rover Curiosity has landed on Mars on 8th August 2012 on Mars near to the Gale Crater location. Since then has been constantly running experiments on the Red Planet sending data to Earth for interpretation. From the experience and knowledge gained during REMS project, the author came out with an idea of the novel spherical sensor structure overcoming some fragility problems detected in the REMS wind sensor. The new 3-D wind sensor concept, besides this advantage, also provided a radical simplification of data post-processing providing comprehensive thermal model based on numerical simulation for any possible wind occurrence. This new device has been developed under Spanish Ministry of the Science and Innovation project: "Sensor de viento para la superficie de Marte para la mission Metnet''. This project, denominated as MEIGA, was a joint effort of many Spanish institution under leadership of Instituto Nacional de Tecnica Aeroespacial (INTA) for the development of space technology for Mars oriented application in a framework of upcoming space mission. To sum up, author's work include contributions to the development of two wind sensor concepts: 1. REMS wind sensor on board of the rover Curiosity in the surface of Mars since August 8th 2012 2. Spherical wind sensor concept developed in a course of MEIGA project
Description
La consulta íntegra de la tesi, inclos l'article no comunicat públicament per drets d'autor, es pot realitzar prèvia petició a l'Arxiu de la UPC
CitationKowalski, L. Contribution to advanced hot wire wind sensing. Tesi doctoral, UPC, Departament d'Enginyeria Electrònica, 2016. Available at: <http://hdl.handle.net/2117/96161>
URIhttp://hdl.handle.net/2117/96161
Collections
Share: