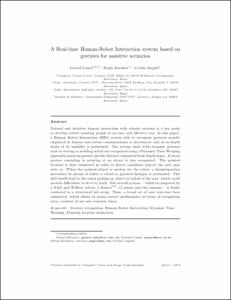 Except where otherwise noted, content on this work is licensed under a Creative Commons license : Attribution-NonCommercial-NoDerivs 3.0 Spain
Abstract
Natural and intuitive human interaction with robotic systems is a key point to develop robots assisting people in an easy and effective way. In this paper, a Human Robot Interaction (HRI) system able to recognize gestures usually employed in human non-verbal communication is introduced, and an in-depth study of its usability is performed. The system deals with dynamic gestures such as waving or nodding which are recognized using a Dynamic Time Warping approach based on gesture specific features computed from depth maps. A static gesture consisting in pointing at an object is also recognized. The pointed location is then estimated in order to detect candidate objects the user may refer to. When the pointed object is unclear for the robot, a disambiguation procedure by means of either a verbal or gestural dialogue is performed. This skill would lead to the robot picking an object in behalf of the user, which could present difficulties to do it by itself. The overall system — which is composed by a NAO and Wifibot robots, a KinectTM v2 sensor and two laptops — is firstly evaluated in a structured lab setup. Then, a broad set of user tests has been completed, which allows to assess correct performance in terms of recognition rates, easiness of use and response times.
CitationCanal, G., Escalera, S., Angulo, C. A real-time human-robot interaction system based on gestures for assistive scenarios. "Computer vision and image understanding", 2016, vol. 149, p. 65-77.
URIhttp://hdl.handle.net/2117/95870
DOI10.1016/j.cviu.2016.03.004
ISSN1077-3142
Publisher versionhttp://www.sciencedirect.com/science/article/pii/S107731421600076X
Collections
Share: