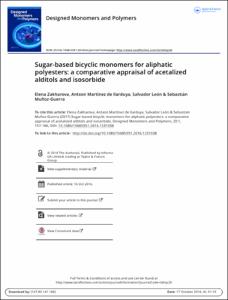 Document typeArticle
Rights accessOpen Access
Abstract
Three series of polyalkanoates (adipates, suberates and sebacates) were synthesized using as monomers three sugar-based bicyclic diols derived from D-glucose (Glux-diol and isosorbide) and D-mannose (Manx-diol). Polycondensations were conducted in the melt applying similar reaction conditions for all cases. The aim was to compare the three bicyclic diols regarding their suitability to render aliphatic polyesters with enhanced thermal and mechanical properties. The ensuing polyesters had molecular weights (Mw) in the 25,000–50,000 g mol-1 range with highest values being attained for Glux-diol. All the polyesters started to decompose above 300 °C and most of them did not display perceivable crystallinity. On the contrary, they had glass transition temperatures much higher than usually found in homologous polyesters made of alkanediols, and showed a stress– strain behavior consistent with their Tg values. Glux-diol was particularly effective in increasing the Tg and to render therefore polyesters with high elastic modulus and considerable mechanical strength.
CitationZakharova, E., Martinez de Ilarduya, A., León, S., Muñoz, S. Sugar-based bicyclic monomers for aliphatic polyesters: a comparative appraisal of acetalized alditols and isosorbide. "Designed monomers and polymers", 16 Octubre 2016, vol. 20, núm. 1, p. 157-166.
URIhttp://hdl.handle.net/2117/95869
DOI10.1080/15685551.2016.1231038
ISSN1385-772X
Publisher versionhttp://www.tandfonline.com/doi/full/10.1080/15685551.2016.1231038
Collections
Share: