A Theory for heterogeneous neuron models based on similarity 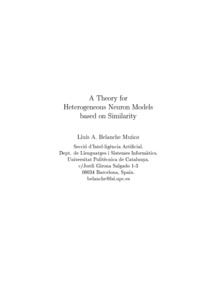 Document typeExternal research report
Rights accessOpen Access
Abstract
This work presents a class of functions serving as generalized neuron models to be used in artificial neural networks. They are cast in the common framework of computing a {it similarity} function, a flexible definition of a neuron as a pattern recognizer. The similarity endows the model with a clear conceptual view and serves as a unification cover for many of the existing neural models, including those classically used for the MultiLayer Perceptron (MLP) and most of those used in Radial Basis Function Neural Networks (RBF). The possibilities of deriving new instances are then explored and several neuron models --representative of their families-- are proposed. These families of models are conceptually unified and their relation is clarified. In addition, the similarity view leads naturally to further extensions of the models to handle heterogeneous information, that is to say, information coming from sources radically different in character, including continuous and discrete (ordinal) numerical quantities, nominal (categorical) quantities, and fuzzy quantities. Missing data are also treated explicitly as such. A neuron of this class is called an {em heterogeneous neuron} and any neural structure making use of them is an Heterogeneous Neural Network (HNN), regardless of the specific architecture or learning algorithm. In this work the experiments are restricted to feed-forward networks, as the initial focus of study. The learning procedures may include a great variety of techniques, basically divided in derivative-based methods (such as the conjugate gradient) and evolutionary ones (such as genetic algorithms).
CitationBelanche, Ll. "A Theory for heterogeneous neuron models based on similarity". 2000.
Is part ofLSI-00-6-R
URIhttp://hdl.handle.net/2117/95856
Collections
Share: