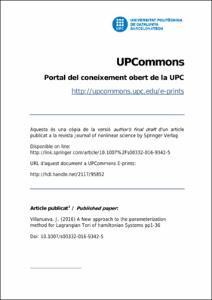 We compute invariant Lagrangian tori of analytic Hamiltonian systems by the parameterization method. Under Kolmogorov’s non-degeneracy condition, we look for an invariant torus of the system carrying quasi-periodic motion with fixed frequencies. Our approach consists in replacing the invariance equation of the parameterization of the torus by three conditions which are altogether equivalent to invariance. We construct a quasi-Newton method by solving, approximately, the linearization of the functional equations defined by these three conditions around an approximate solution. Instead of dealing with the invariance error as a single source of error, we consider three different errors that take account of the Lagrangian character of the torus and the preservation of both energy and frequency. The condition of convergence reflects at which level contributes each of these errors to the total error of the parameterization. We do not require the system to be nearly integrable or to be written in action-angle variables. For nearly integrable Hamiltonians, the Lebesgue measure of the holes between invariant tori predicted by this parameterization result is of O(e1/2)O(e1/2) , where ee is the size of the perturbation. This estimate coincides with the one provided by the KAM theorem.
CitationVillanueva, J. A new approach to the parameterization method for Lagrangian tori of hamiltonian systems. "Journal of nonlinear science", 18 Octubre 2016, p. 1-36.
URIhttp://hdl.handle.net/2117/95852
DOI10.1007/s00332-016-9342-5
ISSN0938-8974
Publisher versionhttp://link.springer.com/article/10.1007%2Fs00332-016-9342-5