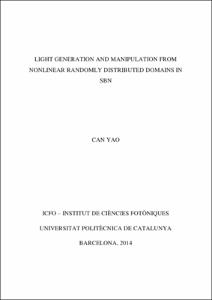 ; Rodríguez Martínez, Francisco
Chair / Department / Institute
Universitat Politècnica de Catalunya. Institut de Ciències Fotòniques
Document typeDoctoral thesis
PublisherUniversitat Politècnica de Catalunya
Rights accessOpen Access
Abstract
Disordered media with refractive index variations can be found in the atmosphere, the ocean, and in many materials or biological tissues. Several technologies that make use of such random media, as image formation, satellite communication, astronomy or microscopy, must deal with an unavoidable light scattering or diffusion. This is why for many years light propagation through random media has been a subject of intensive study. Interesting phenomena such as speckle, coherent backscattering or random lasing have been discovered and studied. More recently, researchers are beginning to investigate mechanisms to control light propagation through such media to enhance light transmission and sharpen the focus. On the other hand, it has been known for several years that nonlinear random structures are able to generate light in an ultra-broad frequency range, without the need of angle or temperature tuning. Particularly interesting is the nonlinear light diffusion observed from materials with no change in the refractive index and which appear to be fully diffusion less to linear light propagation. However, a comprehensive understanding of the scattering when a nonlinear interaction takes place has not yet been given. The core of the thesis focuses on the study of the nonlinear light generation and propagation from crystalline structures with disordered nonlinear domains but with a homogenous refractive index. A random distribution of non-linear domains is found naturally in the Strontium Barium Niobate (SBN) ferroelectric crystal. As opposed to other mono-domain nonlinear optical crystals commonly used for frequency up-conversion, such as Potassium Titanyl Phosphate (KTP) or Lithium Niobate (LiNbO3), in SBN the nonlinear domain size is, typically, on the order of the coherence length or many times smaller than the size of the whole crystal. Such domains are usually several times longer in the c-axis direction relative to the plane perpendicular to that axis. Adjacent domains exhibit antiparallel polarization along such crystalline axis, with no change in refractive index. In Chapter 1 we give a brief introduction to light generation and propagation in random media, describing the speckle, light manipulation and second harmonic generation (SHG). In chapter 2, we study the nonlinear light generation and manipulation from a transparent SBN crystal. In its theoretical description we use a two-dimensional random structure consisting of a homogeneous background polarized in one direction with uniform rectangular boundaries, and a group of square reverse polarization domains with random sizes and located in random positions. The SHG from each domain is obtained using the Green's function formalism. In the experiments, we alter the ferroelectric domain structure of the SBN crystal by electric field poling or thermal treatments at different temperatures. The SBN crystal structures after such different treatments are shown to be characterized by their SHG patterns. In chapter 3, by measuring the spatial distribution of the second harmonic light in the c-plane, we demonstrate that the randomness in the nonlinear susceptibility results in a speckle pattern. We explain the observations as a result of the linear interference among the second harmonic waves generated in all directions by each of the nonlinear domains. In chapter 4, we report on our experimental implementation of the wave-front phase modulation method to control and focus the SHG speckle from the random SBN crystal. This research creates a bridge between light phase modulation and nonlinear optics. Finally we perform a theoretical analysis to demonstrate enhanced efficiencies for nonlinear light focusing by the wave-front phase modulation method in different directions. Various types of nonlinear structures are considered, including the homogeneous rectangular crystal, the group of random domains, and the combination of both.
CitationYao, C. Light generation and manipulation from nonlinear randomly distributed domains in SBN. Tesi doctoral, UPC, Institut de Ciències Fotòniques, 2014. Available at: <http://hdl.handle.net/2117/95412>
URIhttp://hdl.handle.net/2117/95412
DLB 23122-2014
Collections
Share: