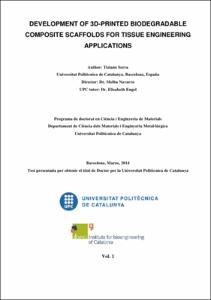 Except where otherwise noted, content on this work is licensed under a Creative Commons license : Attribution-NonCommercial 3.0 Spain
Abstract
The design of smart biodegradable scaffolds plays a crucial role in the regeneration of tissues and restoration of their functionality. Advances in material science and manufacturing and in the understanding on the effects of bio-chemical and bio-physical signals on cell behavior, are leading to a new generation of 3D scaffolds. Recent developments in additive manufacturing, also known as 3D-printing, open new exciting challenges in tissue/organ regeneration by means of the fabrication of complex and geometrically precise 3D structures. This thesis aimed the development and characterization of 3D scaffolds for tissue regeneration. For this, a nozzle-based rapid prototyping system was used to combine polylactic acid and a bioactive CaP glass (coded G5) to fabricate 3-D biodegradable scaffolds. Firstly, optimization of the printing conditions represents a key challenge for achieving high quality 3D-printed structures. Thus, we stress the importance of studying the outcome of the plasticizing effect of PEG on PLA-based blends used for the fabrication of 3D-printed scaffolds. Results indicated that the presence of PEG not only improves PLA processing but also leads to relevant surface, geometrical and structural changes including modulation of the degradation rate of PLA-based 3D printed scaffolds. Secondly, the obtained scaffolds were fully characterized from the physic-chemical point of view. Morphological and structural examinations showed that 3D scaffolds had completely interconnected porosity, uniform distribution of the glass particles, and a controlled and repetitive architecture. In addition, incorporation of G5 particles increased both roughness and hydrophilicity of the scaffolds. Compressive modulus was dependent on the scaffold geometry and the presence of glass. Cell study revealed that G5 glass improved mesenchymal stem cell adhesion after 4 h. Additional biological characterization in terms of the inflammatory response were also carried out. Novel studies have pointed towards a decisive role of inflammation in triggering tissue repair and regeneration, while at the same time it is accepted that an exacerbated inflammatory response may lead to rejection of an implant. Thus, understanding and having the capacity to regulate the inflammatory response elicited by 3D scaffolds aimed for tissue regeneration is crucial. In this context, cytokine secretion and cell morphology of human monocytes/macrophages in contact with biodegradable 3D-printed scaffolds (PLA, PLA/G5 and chitosan ones) with different surface properties, architecture and controlled pore geometry was reported. Results revealed that even though the material itself induced the biggest differences, scaffold geometry also affected on the secretion of cytokines. These findings strengthen the appropriateness of these 3D platforms to study modulation of macrophage responses by specific parameters (chemistry, topography, scaffold architecture). Finally, novel scaffolds composed by two phases (PLA and PLA/G5), for use in guided bone regeneration (GBR) were evaluated. Structural, morphological changes were observed during the in vitro degradation of both PLA and PLA/G5 structures. Although mechanical properties decreased, PLA/G5 scaffolds still showed higher compressive modulus than PLA ones, confirming the reinforcing effect of glass particles after immersion time. In vivo implantation was carried out subcutaneously in mice up to 30 days. Results showed that PLA scaffolds induced mononuclear cell without activating any relevant angiogenic process, while PLA/G5 induced higher presence of multinucleated giant cells and consequently stimulated the vascularization process and further tissue regeneration. The technique/materials combination used in this PhD thesis led to the fabrication of promising fully degradable, mechanically stable, bioactive and biocompatible composite scaffolds with well-defined architectures valuable for TE applications.
Description
Premi extraordinari doctorat 2013-2014
CitationSerra, T. Development of 3D-printed biodegradable composite scaffolds for tissue engineering applications. Tesi doctoral, UPC, Departament de Ciència dels Materials i Enginyeria Metal·lúrgica, 2014. Available at: <http://hdl.handle.net/2117/95344>
Award-winningAward-winning
URIhttp://hdl.handle.net/2117/95344
DLB 19944-2014
Collections
Share: