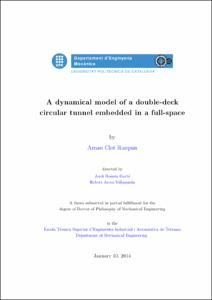 Except where otherwise noted, content on this work is licensed under a Creative Commons license : Attribution-NonCommercial-NoDerivs 3.0 Spain
Abstract
This thesis presents a three-dimensional dynamic model of a double-deck circular tunnel embedded in a full-space. The model uses the receptance method to obtain the response of the complete structure from the response of its parts. The considered subsystems are the interior floor and the tunnel-soil coupled system. The classical thin plate theory is considered to represent the behaviour of the first and the Pipe in Pipe model is chosen to describe the second. Because the complete model is assumed to be geometrically invariant in the train circulation direction, the coupling of both systems is performed in the wavenumber-frequency domain. After the model formulation, some important issues about its numerical computation are detailed and the obtained results are discussed. The response of a double-deck tunnel to a dynamic and to a quasistatic excitation is compared to the response obtained for a simple tunnel. The first comparison is done performing a power flow study of both tunnel structures when a harmonic line load is applied on them. The main differences between their radiation magnitudes and patterns are identified and discussed. The second comparison is done calculating the total amount of energy crossing a certain surface when a static load moving at a constant speed is considered. Results for a wide range of load speeds and radial distances are presented. A complete track-tunnel-soil model is finally obtained coupling a superstructure model to the interior floor model previously presented.
CitationClot Razquin, A. A dynamical model of a double-deck circular tunnel embedded in a full-space. Tesi doctoral, UPC, Departament d'Enginyeria Mecànica, 2014. Available at: <http://hdl.handle.net/2117/95331>
URIhttp://hdl.handle.net/2117/95331
DLB 15983-2014
Collections
Share: