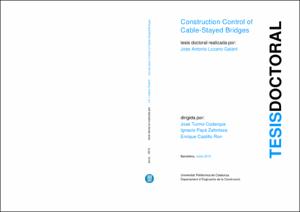 Except where otherwise noted, content on this work is licensed under a Creative Commons license : Attribution-NonCommercial-NoDerivs 3.0 Spain
Abstract
This work presents a study of the simulation of cable-stayed bridges built on temporary supports focused on their response during construction and in service. To simulate the behavior during construction, a set of four different algorithms has been developed to deal with initial design (Backward Algorithm), updating the tensioning process when deviations on site are measured (Forward Algorithm), optimization processes (Direct Algorithm) and time-dependent phenomena effects (Forward-Direct Algorithm). These algorithms were validated by comparing their results with those obtained by two commercial codes. On the other hand, new criteria have been proposed to include the effects of the staggered erection of the superstructure and the time-dependent phenomena effects into the definition of the Objective Service State. To illustrate the application of these methods, a set of academic and actual structures is analyzed. For a more accurate simulation of the actual response of structures on site, a new Structural System Identification (SSI) method (Observability method) is developed. This method is based on the information provided by the monitoring of a static non-destructive test. After validating the results of this method with three alternative methods proposed in the literature, it is applied to complex structures (such as singular buildings and cable-stayed bridges). A parametric analysis is presented to illustrate the role that the uncertainty of each parameter of a real cable-stayed bridge plays in its behavior during construction and in service. Furthermore, modifications of this method to deal with damages, actual boundary conditions, temperature effects, and dynamic excitation tests are presented. The developed SSI method has also lead to the development of a very powerful mathematical tool to deal with polyrational systems of equations. This tool presents a number of applications in many fields of science and engineering (such as transportation, hydraulics or energy power distribution, among many others). To define the minimum measurement set of measurements required for an adequate system identification, a new and innovative graphical tool (observability tree) is developed. To ease the representation of these trees, a set of guidelines is proposed for beam and cable-stayed bridges. To minimize the degrees of freedom to be monitored on site for system identification with actual loads, a new application of the Maxwell's theorem has been proposed. To this end, the utilization of information from alternative load cases, boundary conditions and construction stages is also presented. The results of the proposed methods have led to significant conclusions regarding the response of the cable-stayed bridges built on temporary supports both during construction and in service as well as the importance of their construction control by SSI techniques. From these conclusions, a set of guidelines has been proposed to address the erection of the superstructure, to estimate the appropriate time to define the stay cable forces in service in concrete cable-stay bridges considering time-dependent phenomena effects, to define a measurement set for an adequate SSI and to minimize the points to be monitored.
Description
Premi extraordinari doctorat curs 2012-2013, àmbit d’Enginyeria Civil
CitationLozano Galant, J.A. Construction control of cable-stayed bridges. Tesi doctoral, UPC, Departament d'Enginyeria de la Construcció, 2013. Available at: <http://hdl.handle.net/2117/95320>
Award-winningAward-winning
URIhttp://hdl.handle.net/2117/95320
DLB 16006-2014
Collections
Share: