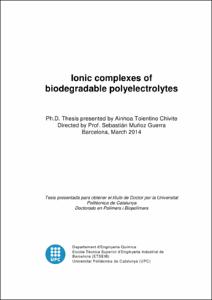 Show full item record
Tolentino Chivite, Ainhoa
Tutor / director / evaluatorRonda Bargalló, Joan Carles
Chair / Department / Institute
Universitat Politècnica de Catalunya. Departament d'Enginyeria Química
Document typeDoctoral thesis
PublisherUniversitat Politècnica de Catalunya
Rights accessOpen Access
Abstract
Biopolymers are polymers produced by living organisms. A more broad classification would embrace also those polymers synthesized from renewable sources which are able to display biodegradability. The demand of biopolymers has been continuously growing along these last decades. The main reason for such increasing interest is their sustainability; the renewable origin of biopolymers makes them inexhaustible in contrast with synthetic polymers produced from finite fossil sources. Biodegradability is a second advantage; due to the presence in the nature of enzymes able to degrade biopolymers under environmental conditions to give non-toxic products, their impact on the environment is basically trivial. Finally, the use of more or less modified biopolymers as biomaterials, owing to their unique properties of biocompatibility and biodegradability, has aroused their interest in several disciplines. As a result of all these considerations, great efforts in biopolymers research including chemical modification, characterization and property evaluation are today being carried out to develop new materials able to replace traditional plastics in a wide diversity of applications. In the present Thesis, a selection of carboxylic biopolymers has been studied for their capacity to form stable ionic complexes with cationic surfactants suitable to render new materials with advanced properties. Previous studies on polyelectrolytesurfactant complexes carried out in our group have demonstrated that these coupled systems tend to be self-assembled in well-ordered structures that can be exploited for building films and particles with singular properties as biomaterials. The main goal of this Thesis is the study of polyelectrolyte-ionic complexes based on naturally occurring polyacids and cationic surfactants. One part of the work delves into the complexes of poly(g-glutamic acid), a system that has been object of continuous research in our group from 90s. The aim is to progress in the development by making them "greener" through coupling with bio-based surfactants, and by improving their basic properties through blending with nanoclays. The other part is dedicated to explore the ionic complexes made from poly(uronic acid)s and cationic surfactants. This is the first time that such complexes are examined and their structural features and properties compared to those displayed by complexes based on poly(glutamic acid). Experimentally, the Thesis embodies a multidisciplinary task work including preparation, structural characterization and evaluation of thermal properties of a series of ionic complexes, as well as a preliminary valuation of the suitability of some of them to be used as drug delivery systems. Hence, the specific objectives in this Thesis are enumerated as follows: 1. Synthesis and chemical characterization of ionic complexes of poly(uronic acid)s (pectinic, alginic and hyaluronic acids), with trimethylalkylammonium surfactants of n= 18, 20 and 22. Structural and thermal analysis of these complexes and critical comparison of results with those available for complexes made of poly(glutamic acid). 2. Synthesis and characterization of choline-based surfactants for the preparation of fully bio-based polyglutamic complexes as an alternative to complexes based on trimethylalkylammonium surfactants in their potential use as biomaterials. Structural and thermal analysis of these complexes and their preliminary evaluation as nano-particulated drug delivery systems. 3. Preparation of composites of poly(glutamic acid)-cationic surfactant complexes with organo-modified nanoclays, their extensive structural characterization and the evaluation of their thermal and mechanical properties compared to those displayed by the neat complexes. The Thesis is organized in five Chapters. After a very brief summary of the whole work with explicit definition of the objectives, Chapter I is an introduction to the subject, in which an extensively referenced account of the main hints previously achieved in the field is provided and the state-of-art is described. The following three Chapters correspond to the three specific objectives enumerated above. Chapter II gathers the synthesis, characterization and properties evaluation study carried out on ionic complexes of poly(uronic acid)s. Chapter III is focused on the study of ionic complexes of polyglutamic and alkanoylcholines, the synthesis and characterization of the surfactants, the preparation of their complexes with poly(glutamic acid) and their possibilities as potential biomaterials. Chapter IV covers the preparation of the composites made of Cloisite 30B and poly(glutamic acid) complexes along with a detailed study of their structure by X-ray diffraction, electron microscopy and modeling, and a correlative analysis of their structure with their thermal and mechanical properties. Chapter V contains the whole collection of conclusions that have been drawn from the Thesis. The author’s profile and published scientific production coming out from the Thesis constitute the body of the closing part.
CitationTolentino Chivite, A. Ionic complexes of biodegradable polyelectrolytes. Tesi doctoral, UPC, Departament d'Enginyeria Química, 2014. Available at: <http://hdl.handle.net/2117/95310>
URIhttp://hdl.handle.net/2117/95310
DLB 15950-2014
Collections
Share: