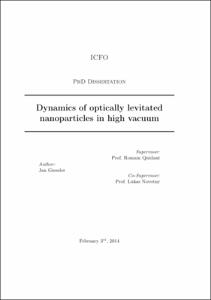 Show full item record
Gieseler, Jan
Tutor / director / evaluatorQuidant, Romain; Novotny, Lukas
Chair / Department / Institute
Universitat Politècnica de Catalunya. Institut de Ciències Fotòniques
Document typeDoctoral thesis
PublisherUniversitat Politècnica de Catalunya
Rights accessOpen Access
Abstract
Nanotechnology was named one of the key enabling technologies by the European Commission and its tremendous impact was envisioned early by 20th century physicist R.Feynman in his now oft-quoted talk "Plenty of Room at the bottom". Nanotechnology and nanoscience deal with structures barely visible with an optical microscope, yet much bigger than simple molecules. Matter at this mesoscale is often awkward to explore as it contains too many atoms to be easily understood by straightforward application of quantum mechanics (although the fundamental laws still apply). Yet, these systems are not so large as to be completely free of quantum effects; thus, they do not simply obey the classical physics governing the macroworld. It is precisely in this intermediate regime, the mesoworld, that unforeseen properties of collective systems emerge. To fully exploit the potential of nanotechnology, a thorough understanding of these properties is paramount. The objective of the present thesis is to investigate and to control the dynamics of an optically levitated particle in high vacuum, a system which belongs to the broader class of nanomechanical oscillators. Nanomechanical oscillators exhibit high resonance frequencies, diminished active masses, low power consumption and high quality factors - significantly higher than those of electrical circuits. These attributes make them suitable for sensing, transduction and signal processing. Furthermore, nanomechanical systems are expected to open up investigations of the quantum behavior of mesoscopic systems. Testing the predictions of quantum theory on macroscopic scales is one of today's outstanding challenges of modern physics and addresses fundamental questions on our understanding of the world. The state-of-the-art in nanomechanics itself has exploded in recent years, driven by a combination of interesting new systems and vastly improved fabrication capabilities. Despite major break-throughs, including ground state cooling, observation of radiation pressure shot noise, squeezing and demonstrated ultra-high force and mass sensitivity, difficulties in reaching ultra-high mechanical quality (Q) factors still pose a major limitation for many of the envisioned applications and significant improvements in mechanical quality (Q) factors are generally needed to facilitate quantum coherent manipulation. This is difficult given that many mechanical systems are approaching fundamental limits of dissipation. To overcome the limitations set by dissipation, I developed an experiment to trap and cool nanoparticles in high vacuum. The combination of nanoparticles and vacuum trapping results in a very light and ultra-high-Q mechanical oscillator. In fact, the Q-factor achieved with this setup is the highest observed so far in any nano- or micromechanical system. The scope of the thesis ranges from a detailed description of the experimental apparatus and proof-of-principle experiments (parametric feedback cooling) to the first observation of phenomena owing to the unique parameters of this novel optomechanical system (thermal nonlinearities). Aside from optomechanics and optical trapping, the topics covered include the dynamics of complex (nonlinear) systems and the study of fluctuation theorems, the latter playing a pivotal role in statistical physics. Optically trapped nanoparticles are just beginning to emerge as a new class of optomechanical systems. Owing to their unique mechanical properties, there is clearly a vast and untapped potential for further research. Primary examples of how levitated particles in high vacuum can impact other fields and inspire new research avenues have been the first observation of thermal nonlinearities in a mechanical oscillator and the study of fluctuation relations with a high-Q nanomechanical resonator. Based on recent progress in the field, a plethora of fundamental research opportunities and novel applications are expected to emerge as this still young field matures.
Description
Premi extraordinari doctorat 2013-2014
CitationGieseler, J. Dynamics of optically levitated nanoparticles in high vacuum. Tesi doctoral, UPC, Institut de Ciències Fotòniques, 2014. Available at: <http://hdl.handle.net/2117/95281>
Award-winningAward-winning
URIhttp://hdl.handle.net/2117/95281
DLB 15990-2014
Collections
Share: