Characterizing and witnessing multipartite correlations : from nonlocality to contextuality 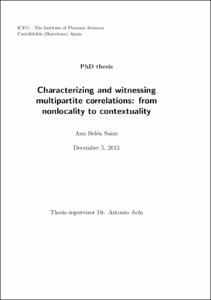 In the past century, experimental discoveries have witnessed phenomena in Nature which challenge our everyday classical intuition. In order to explain these facts, quantum theory was developed, which so far has been able to reproduce the observed results. However, I believe that our understanding of quantum mechanics can be significantly improved by the search for an operational meaning behind its mathematical formulation, which would help to identify the limitations and possibilities of the theory for information processing. An intriguing property of quantum theory is its intrinsic randomness. Indeed, Einstein, Podolsky and Rosen in 1935 questioned the completeness of quantum theory. They argued the possibility of the existence of a complete theory where variables to which we have not access determine the behaviour of physical systems, and the randomness observed in quantum mechanics is then due to our ignorance of these variables. These hidden variables theories, however, were proved not to be enough for explaining the predictions of quantum theory, as shown in the no-go theorems by Bell on quantum-nonlocality and by Kochen and Specker on quantum-contextuality. In the past decades, many experiments have corroborated the nonlocal and contextual character of Nature. However, no intuition behind these phenomena has been found, in particular about what limits their strength. In fact, special relativity alone would allow for phenomena which are more nonlocal than what quantum theory allows. Hence, much effort has been devoted to find the physical properties of quantum theory that restricts these phenomena. In this thesis, we study the constraints that arise on nonlocal and contextual phenomena when a certain exclusiveness structure compatible with quantum theory is imposed in the space of events. Here, an event denotes the situation where an outcome is obtained given that a measurement is performed on the physical system. Regarding nonlocality, we introduce a notion of orthogonality that states that events involving different outcomes of the same local measurement are exclusive, and construct constraints that the correlations among observers should satisfy. We denote this by Local Orthogonality principle (LO), which is the first intrinsically multipartite principle for bounding quantum correlations. We prove that LO identifies the supra-quantum character of some bipartite and multipartite correlations, and gets close to the quantum boundary. When studying contextuality, the same abstract event may correspond to outcomes of different measurements, which introduces a non-trivial structure in the space of events. For its study, we develop a general formalism for contextuality scenarios in the spirit of the recent approach by Cabello, Severini and Winter. In our framework, nonlocality arises as a particular case of contextuality, which allows us to study a generalization of LO. Both in nonlocality and contextuality, we find close connections to problems in combinatorics and hence use graph-theoretical tools for studying correlations. Finally, this thesis also studies the detection of nonlocal correlations. Most results on quantum nonlocality focus on few particles' experiments, while less is known about the detection of quantum nonlocality in many-body systems. Standard many-body observables involve correlations among few particles, while there is still no multipartite Bell inequality to test nonlocality merely from these data. In this thesis, we provide the first proposal for nonlocality detection in many-body systems using two-body correlations. We construct families of Bell inequalities from two-body correlators, which can detect nonlocality for systems with large number of constituents. In addition, we prove violations by systems which are relevant in nuclear and atomic physics, and show how to test these inequalities by measuring global spin components, hence opening the problem to experimental realizations.
CitationSainz, A. B. "Characterizing and witnessing multipartite correlations : from nonlocality to contextuality". Tesi doctoral, UPC, Institut de Ciències Fotòniques, 2014. Available at: <http://hdl.handle.net/2117/95280>
URIhttp://hdl.handle.net/2117/95280
DLB 15957-2014