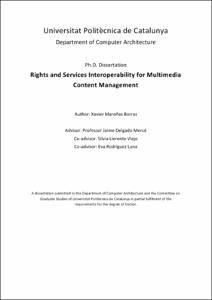 Except where otherwise noted, content on this work is licensed under a Creative Commons license : Attribution-NonCommercial-NoDerivs 3.0 Spain
Abstract
The main goal of the work presented in this thesis is to describe the definition of interoperability mechanisms between rights expression languages and policy languages. Starting from languages interoperability, the intention is to go a step further and define how services for multimedia content management can interoperate by means of service-oriented generic and standardised architectures. In order to achieve this goal, several standards and existing initiatives will be analysed and taken into account. Regarding rights expression languages and policy languages, standards like MPEG-21 Rights Expression Language (REL), Open Digital Rights Language (ODRL) and eXtensible Access Control Markup Language (XACML) are considered. Regarding services for content management, the Multimedia Information Protection And Management System (MIPAMS), a standards-based implemented architecture, and the Multimedia Service Platform Technologies (MSPT), also known as MPEG-M standard, are considered. The contribution of this thesis is divided into two parts, one devoted to languages interoperability and the other one devoted to services interoperability, both addressed to multimedia content management. They are briefly described next. The first part of the contribution describes how MPEG-21 REL, ODRL and XACML can interoperate, defining the mapping mechanisms to translate expressions from language to language. The mappings provided have different levels of granularity, starting from a mapping based on a programmatic approach coming from high-level modelling diagrams done using Unified Modelling Language (UML) and Entity-Relationship (ER). The next level of mappings includes specific mappings between MPEG-21 REL and XACML and ODRL and XACML. Finally, a more general solution is proposed by using a broker. Part of this work was done in the context of the VISNET-II Network of Excellence and the AXMEDIS Integrated Project. The findings done prove the validity of the interoperability methods described. The second part of the contribution describes how to describe standards based building blocks to provide interoperable services for multimedia content management. This definition is based on the analysis of existing content management use cases, from the ones involving less security over multimedia content managed to the ones providing full-featured digital rights management (DRM) (including access control and ciphering techniques) to support secure content management. In this section it is also presented the work done in the research projects AXMEDIS, Musiteca and Culturalive. It is also shown the standardisation work done for MPEG-M, particularly on elementary services and service aggregation. To demonstrate the usage of both technologies a mobile application integrating both MPEG-M and MIPAMS is presented. Furthermore, some conclusions and future work is presented in the corresponding section, together with the refereed publications, which are briefly described in the document. In summary, the work presented can follow different research lines. On the one hand, further study on rights expression languages and policy languages is required as new versions of them have recently appeared. It is worth noting the standardisation of a contract expression language, MPEG-21 CEL, which has also to be further analysed in order to evaluate its interoperability with rights and policy languages. On the other hand, standard initiatives must be followed in order to complete the map of SB3's, considering MPEG standards and also other standards not only related to multimedia but also other application scenarios, like e-health or e-government.
CitationMaroñas Borras, X. Rights and services interoperability for multimedia content management. Tesi doctoral, UPC, Departament d'Arquitectura de Computadors, 2013. Available at: <http://hdl.handle.net/2117/95271>
URIhttp://hdl.handle.net/2117/95271
DLB 16010-2014
Collections
Share: