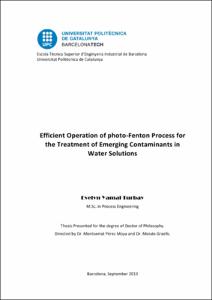 Except where otherwise noted, content on this work is licensed under a Creative Commons license : Attribution-NonCommercial 3.0 Spain
Abstract
The growth of population density in some areas of the planet and the increasing fast advances in technology and energy issues, have resulted in a remarkable increment in the necessity for goods and services, with a subsequent over-exploitation and pollution of the environmental resources. Water, a non-renewable resource, does not escape from the harmful effects of human activity and its increasing pollution levels threaten the normal development of ecosystems and life as well. In the last decades, the occurrence of a new generation of contaminants has been detected in wastewaters, surface and underground waters, and even in drinking water. These substances, called "emerging contaminants" or "emerging pollutants", are not subject to regulation, but their recalcitrant character and their effects as endocrine disruptors suggest that their bio-accumulation will have severe consequences to the environment. These non-biodegradable compunds cannot be removed in conventional wastewater treatment plants, and there is a need for chemical processes to oxidize them at least to bio-degradable or non-toxic species. Advanced oxidation processes (AOPs) have demonstrated to be particularly useful in degrading and eventually mineralizing emerging contaminants, but the complexity of their mechanisms and the high reagent and energy costs involved, make necessary to develop options to improve their performance. This thesis specifically addresses the photo-Fenton process, an advanced oxidation process which has been widely applied and has demonstrated to be efficient in the degradation of recalcitrant organic contaminants. The objective of this thesis is to investigate and to propose operating alternatives to improve the performance of photo-Fenton process. For that aim, it was necessary to fulfill some specific objectives: to perform a detailed study of the variables involved in the process, propose its enhancement throughout a systematic dosage of hydrogen peroxide along the treatment span, simulate the process and to investigate opportunities to optimize the process batch recipe. In the first stage of the investigation, with a clear experimental approach, the variables involved in the process were studied and a novel, flexible and easy-to-implement hydrogen peroxide systematic dosage protocol was proposed, improving the mineralization of three emerging contaminants, reaching almost total mineralization in some of the cases. However, the effectiveness of the protocol is strongly influenced by the crossed effect between the involved parameters. In a subsequent stage, a computational approach, the process involving the proposed dosage protocol is simulated and the performance of the process was predicted at different operational conditions. The opportunities for improving process performance when the parameters concerning the dosage protocol are conveniently adjusted can be addressed. Finally, taking a step forward, a first attempt to investigate the alternatives for process optimization was investigated, demonstrating that operational costs can be reduced without diminishing the quality of the final product. As a final remark, this thesis supposes a step forward in the improvement of advanced oxidation processes and it opens the door to continue developing strategies to model, simulate and optimize these complex processes.
CitationYamal Turbay, E. Efficient operation of photo-Fenton process for the treatment of emerging contaminants in water solutions. Tesi doctoral, UPC, Departament d'Enginyeria Química, 2013. Available at: <http://hdl.handle.net/2117/95256>
URIhttp://hdl.handle.net/2117/95256
DLB 13737-2014
Collections
Share: