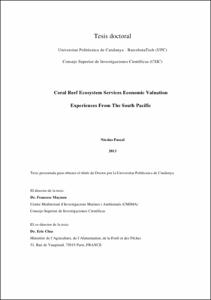 Show full item record
Pascal, Nicolas
Tutor / directorMaynou i Hernàndez, Francesc; Clua, Eric
Chair / Department / Institute
Universitat Politècnica de Catalunya. Departament d'Enginyeria Hidràulica, Marítima i Ambiental
Document typeDoctoral thesis
PublisherUniversitat Politècnica de Catalunya
Rights accessOpen Access
Abstract
Economic approaches through ecosystem services (ES) valuation are increasingly recommended by conservation organisations to face main market externalities affecting biodiversity in general and coral reef ecosystems. In this dissertation, we will analyse the experience of two economic valuations of coral reef ecosystems in the Pacific focusing on two aspects. The first is to evaluate if current methods of Coral Reef Ecosystem Services Valuation (CRESV) permits to transmit a correct signal about ES and the second is to assess the impacts of results on policy-making and market externalities. The first study is the economic valuation of the coral reef ecosystems of New Caledonia. Financed by French Ministries of Environment and Oversea Territories, the main objective was to make visible the value of this ecosystem in the economy of the territory. The second one is a cost-benefit analysis of Marine Protected Areas in Vanuatu. Required by the French Development Bank, the aim was to realize an ex-post valuation of the impacts of marine biodiversity conservation on the economic development of the implicated villages and other stakeholders. More precisely, MPA impacts on the ES were quantified, total costs linked to each MPA were calculated and the C-B (Cost-Benefit) ratio and RoI (Return-on-Investment) were computed. More than 10 ecosystem services have been analysed with methods mainly based on financial values through producer surplus and avoided damage costs. Applied methods are classic ones with some improvements and originality such as the use of protein content equivalent for subsistence fishery, the larval stomach content to quantify links between reef ecosystem and pelagic fisheries, the application of the Advertising Image Analysis to tune the role of CR in the tourism motivation, the setup of experimental fishery to determine precise improvements in fishery productivity and the adaptation of a bio-physical model for coastal protection ES. Results in New Caledonia have permitted to make visible a contribution comprised between 195 and 330 M!.y-1 highlighting the importance of the coastal protection, the noncommercial fishery and the underwater tourism. In Vanuatu, for donors and local policymakers, we demonstrated that, after at least 6 years of MPA implementation, all RoI except one were above 0, implying that financial benefits exceed costs. Based on a 25-year project life, the average expected C-B ratios was 4.1. We estimate the mean aggregate economic value of MPA impacts to be approximately US$ 44,000 per year per km2. Tourism ES were the largest estimated effect for all MPAs, despite stark differences in tourism development across sites. Impacts on tourism were followed by impacts on fish productivity. CRESV in the South Pacific context are complex exercises, which face a series of specific challenges to transmit a "right" signal about their importance. Some solutions have been proposed and discussed. The results of the 2 reports have mostly been used for "informative" purposes by public organisations and support in an ex-ante decision has been scarce. Different reasons are advanced to explain this lower than expected impact such as the lack of precise definition of the decision making question and the absence of a clear strategy of communication to different audiences. The next step to improve the application of information produced by CRESVs is to directly inform public decisions, play a role in designing instruments such as PES, and be utilised in local development planning. In parallel, the financial approach of ESV can bring concrete information about potential returns for private sources of financing for conservation. Funds such as impact investment may be attracted by the MPA¿s financial ratios as the business case for Vanuatu was convincingly made.
CitationPascal, N. Coral reef ecosystem services economic valuation experiences from the South Pacific. Tesi doctoral, UPC, Departament d'Enginyeria Hidràulica, Marítima i Ambiental, 2013. Available at: <http://hdl.handle.net/2117/95239>
URIhttp://hdl.handle.net/2117/95239
DLB 13759-2014
Collections
Share: