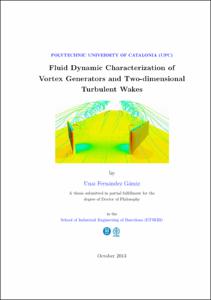 ; Velte, Clara M.
Chair / Department / Institute
Universitat Politècnica de Catalunya. Departament de Mecànica de Fluids
Document typeDoctoral thesis
PublisherUniversitat Politècnica de Catalunya
Rights accessOpen Access
Abstract
The main objective of this PhD thesis is the fluid dynamic characterization of the flow behind vortex generators (VG) as well as to investigate their influence in the separation of the boundary layer. CFD simulations have been carried out for the analysis of the flow downstream a single vortex generator on a flat plate. In order to evaluate the induced flow effect of the VG, a test case of a single rectangular VG has been designed and the flow have been numerically simulated and analyzed. Three-Dimensional steady state simulations at low Reynolds number have been performed using EllipSys3D CFD code and the computational results have been compared with experimental data. The self-similar behavior and the helical symmetry on the VG induced flow have been studied. The computations have demonstrated considerable reliability when reproducing the physics of the VG by a rectangular vortex generator. Furthermore, a detailed analysis of the equilibrium parameters has been made on a two-dimensional turbulent wake in two different test cases: a twin-plate and a symmetric airfoil (NACA0012). Both cases have been numerically analyzed and the computational results have been compared with experimental observations. The self-similar behaviour on the wake generated by a twin-plate and a symmetric airfoil has been tested and the CFD results match the experimental observations reasonably well.This thesis has been divided into five main parts:PART I. In this part is presented the importance of this research as well as the main motivation to carry out such work. An extensive description of the state of the art on vortex generators models is presented with high emphasis on wind turbine applications. Further, a very detailed explanation of the state of the art on self-similarity and on two-dimensional turbulent wake equilibrium is given.PART II. The three chapters of this part comprise the foundation of this thesis. In this part there is a detailed description of the vortex generator models used in this research, as well as a comparison of the computational results with the wind tunnel experiments carried out by Clara M. Velte, as a validation tool of the computations. The implementation of the BAY model into the EllipSys CFD code is described in Chapter 5 and it was performed in conjunction with N.N. S?rensen and P.E. Rethore. Finally a parametric study of the device angle dependency of a single VG on a flat plate is described in Chapter 7. Four different angles of attack have been selected for this parametric study: 20º, 25º, 30º and 35º.PART III. In this part, a self-similarity analysis has been made on a single rectangular VG on a flat plate. The simulations were able to capture the helical behaviour of the vortex generator wake with good accuracy when comparing with the experimental data. A very detailed description of the downstream evolution of the helical parameters in the computations is presented in this chapter 8 and compared with experimental results.
CitationFernández Gámiz, U. Fluid dynamic characterization of vortex generators and two-dimensional turbulent wakes. Tesi doctoral, UPC, Departament de Mecànica de Fluids, 2013. Available at: <http://hdl.handle.net/2117/95221>
URIhttp://hdl.handle.net/2117/95221
DLB 13756-2014
Collections
Share: