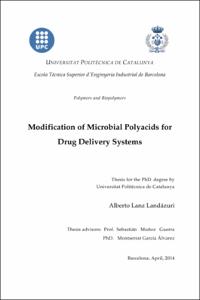 Chair / Department / Institute
Universitat Politècnica de Catalunya. Departament d'Enginyeria Química
Document typeDoctoral thesis
PublisherUniversitat Politècnica de Catalunya
Rights accessOpen Access
Abstract
Polymers are becoming preferred materials in biomedical applications because of their vast diversity of properties, functionalities and applications. Properties as mechanical strength, stability against degradation, biocompatibility and biodegradability, among others, have been attractive for different medical applications. One of the most interesting applications of these materials is drug delivery systems. Biodegradable polymers and copolymers are the preferred materials for the manufacture of a variety of devices for temporal applications in medicine and pharmacology; these biodegradable polymers can be chemically synthesized or biologically produced. Biotechnological polymers have attracted much attention because two main advantages; first, they are produced from renewable resources; and second, as they are biologically produced they are biocompatible, biodegradable and bioresorbable materials. Thus, modification of biotechnological polymers to obtain specific properties or functionalities is a good strategy for the development of promising biomedical materials. In this Thesis the water soluble biotechnological polymer poly(ß,L-malic acid) (PMLA) was modified to change its hydrophilic character to produce non water-soluble polymers capable of forming particulate systems for drug encapsulation and controlled release. PMLA is a polyester-3 with a pendant carboxylic group; it is biocompatible, biodegradable and bioresorbable. The carboxylic side group can be substituted in order to modify the properties of the polymer. The polymer as polyelectrolyte, is also water-soluble. Different strategies were used for polymer derivatization: direct esterification and amidation through the activation of the carboxylic side groups with carbodiimides; ionic complex formation with a cationic drug (Doxorubicin); and esterification with aliphatic long chains by a two step method employing thiol-ene click reactions. Obtained PMLA derivatives resulted in hydrophobic or amphiphilic polymers, which were appropriated for nanoparticle formation, either by emulsion solvent evaporation or by precipitation dialysis techniques. Derivatives physicochemical characterization was made by 1H and 13C nuclear magnetic resonance (NMR) spectroscopy, gel permeation chromatography (GPC) and differential scanning calorimetry. Hydrolytic degradation was followed by GPC and 1H NMR, while particles were observed by scanning electron microscopy and their size and surface charge characterized by dynamic light scattering and ζ-potential measurement. Assays of drug encapsulation and release were also performed and cytotoxicity tests were done on cancer cell lines. Nanoparticles (100-300 nm aprox.) were obtained from all PMLA derivatives, except for the ionic complex which formed microparticles. Nanoparticles showed potential as drug delivery systems since they were able to encapsulate the anticancer drugs Temozolomide and Doxorubicin, as well as the model drugs Theophylline and Carbamazepine. Drug release was assessed under physiological conditions; the release rate was found to depend on encapsulation method, drug and polymer derivative. Hydrolytic degradation assays showed that free malic acid and the organic compound derived from the reagent used for modification were the last products of aqueous degradation of PMLA derivatives. Cytotoxicity tests demonstrated the low toxicity of the synthesized derivatives. Results generated in this Thesis suggest that the biotechnological polymer PMLA is a material of interest as a platform for the design and development of biodegradable drug delivery systems with potential in the therapy of diseases considered today challenging for pharmacologic treatment.
CitationLanz Landázuri, A. Modification of microbial polyacids for drug delivery systems. Tesi doctoral, UPC, Departament d'Enginyeria Química, 2014. Available at: <http://hdl.handle.net/2117/95219>
URIhttp://hdl.handle.net/2117/95219
DLB 13714-2014
Collections
Share: