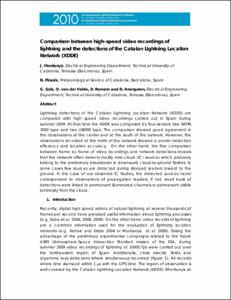 Except where otherwise noted, content on this work is licensed under a Creative Commons license : Attribution-NonCommercial-NoDerivs 3.0 Spain
Abstract
Lightning detections of the Catalan Lightning Location Network (XDDE) are compared with high speed video recordings carried out in Spain during summer 2009. At that time the XDDE was composed by four sensors: two SAFIR 3000 type and two LS8000 type. The comparison showed good agreement in the observations at the center and at the south of the network. However, the observations recorded at the north of the network showed a poorer detection efficiency and location accuracy. On the other hand, the fine comparison between frame by frame of video recordings and network detections reveals that the network often detects mostly intra-cloud (IC) sources which probably belong to the preliminary breakdown in downward cloud-to-ground flashes. In some cases few sources are detected during steeped leaders toward to the ground. In the case of our observed IC flashes, the detected sources never corresponded to observations of propagation leaders, if not, small burst of detections were linked to permanent illuminated channels or permanent visible luminosity from the cloud.
CitationMontaña, J. [et al.]. Comparison between high-speed video recordings of lightning and the detections of the Catalan Lightning Location Network (XDDE). A: International Lightning Detection Conference. "21st International Lightning Detection Conference". Lake Buena Vista (FL): 2010.
URIhttp://hdl.handle.net/2117/9521
Collections
Share: