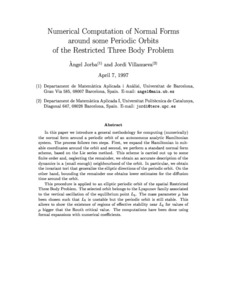 In this paper we introduce a general methodology for computing (numerically) the normal form around a periodic orbit of an autonomous analytic Hamiltonian system. The process follows two steps. First, we expand the Hamiltonian in suitable coordinates around the orbit and second, we perform a standard normal form scheme, based on the Lie series method. This scheme is carried out up to some finite order and, neglecting the remainder, we obtain an accurate description of the dynamics in a (small enough) neighbourhood of the orbit. In particular, we obtain the invariant tori that generalize the elliptic directions of the periodic orbit. On the other hand, bounding the remainder one obtains lower estimates for the diffusion time around the orbit. This procedure is applied to an elliptic periodic orbit of the spatial Restricted Three Body Problem. The selected orbit belongs to the Lyapunov family associated to the vertical oscillation of the equilibrium point $L_5$. The mass parameter $\mu$ has been chosen such that $L_5$ is unstable but the periodic orbit is still stable. This allows to show the existence of regions of effective stability near $L_5$ for values of $\mu$ bigger that the Routh critical value. The computations have been done using formal expansions with numerical coefficients.
URIhttp://hdl.handle.net/2117/952