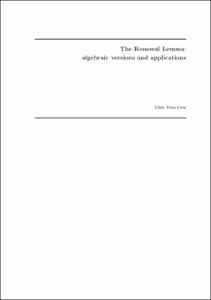 This thesis presents some contributions in additive combinatorics and arithmetic Ramsey theory. More specifically, it deals with the interaction between combinatorics, number theory and additive combinatorics. This area saw a great improvement with the Szemerédi Regularity Lemma and some of the results that followed. The Regularity Lemma and its consequences have become a widely used tool in graph theory, combinatorics and number theory. Furthermore, its language and point of view has deeply changed the face of additive number theory, a fact universally acknowledged by the Abel award given to Szemerédi in 2012. One of the main reasons for the prize has been Szemerédi's theorem, a result regarding the existence of arbitrarily long arithmetic progressions in dense sets of the integers, the proof of which uses the Regularity Lemma in a key step. One of the earlier consequences of the Regularity Lemma was the Removal Lemma for graphs that was used by Ruzsa and Szemerédi to show Roth theorem, regarding the existence of 3-term arithmetic progressions in dense sets of the integers, in a combinatorial way. The Removal Lemma states that in any graph K with few copies of a subgraph, say a triangle, we can remove few edges from K so that the result contains no copy of the subgraph. This has become a key tool in the applications of the so-called Regularity Method, which has extensive literature in combinatorics, graph theory, number theory and computer science. In 2005 Green introduced a regularity lemma for Abelian groups as well as an algebraic removal lemma. The removal lemma for groups states that, for a given finite Abelian group G, if there are o(|G|^3) solution to x+y+z+t=0 with the variables taking values in S, a subset of G, then we can remove o(|G|) elements from S to make the set S solution-free. The main contributions of this work corresponds to extensions of the removal lemma for groups to either more general contexts, like non-necessary Abelian finite groups, or to linear systems of equations for finite Abelian groups. The main goal is to give a comprehensive and more general framework for many results in additive number theory like Szemerédi Theorem. In particular, we show that the removal lemma for groups by Green can be extended to non-necessary Abelian finite groups. Moreover, we prove a removal lemma for linear systems on finite fields: for every e>0 there exists a d>0 such that if A is a (k x m) linear system of equations with coefficients in a finite field F and the number of solutions to Ax=b, where each variable takes values from a subset Si in F is less than d times |F| raised to m-k, then by removing less than e|F| elements in each Si we can make the resulting sets solution-free, thus solving a conjecture by Green to that respect. Even more, if A is an integer linear system, G is a finite Abelian group, and the determinantal of A and |G| are coprime, then a similar statement holds. Let us mention that the last result allows us to characterize those linear systems where any set S with size proportional to G has a nontrivial solution in S, provided |G| is large enough. This extends the validity of Szmerédi's theorem to finite Abelian groups. These extensions of the removal lemma have been used in arithmetic Ramsey theory to obtain counting results for the number of monochromatic solutions of linear systems. The main result from a work by Frankl, Graham and Rödl in '88 states that the number of monochromatic solutions of regular systems in integer intervals is in fact a positive proportion of the total number of solutions. We give analogous results for solutions in Abelian groups with bounded exponent, for which the main tool in the torsion-free case cannot be applied. Density versions of these counting results are also obtained, in this case with a full characterization.
CitationVena Cros, L. "The Removal Lemma: algebraic versions and applications". Tesi doctoral, UPC, Departament de Matemàtica Aplicada IV, 2012. Available at: <http://hdl.handle.net/2117/95187>
URIhttp://hdl.handle.net/2117/95187
DLB 9860-2014