Local and global phenomena in piecewise-defined systems: from big bang bifurcations to splitting of heteroclinic manifolds 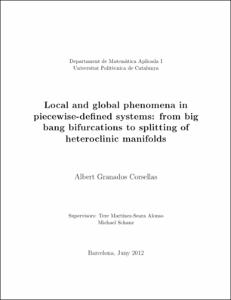 In the first part, we formally study the phenomenon of the so-called big bang bifurcations, both for one and two-dimensional piecewise-smooth maps with a single switching boundary. These are a special type of organizing centers consisting on points in parameter space with co-dimension higher than one from which an infinite number of bifurcation curves emerge. These separate existence regions of periodic orbits with arbitrarily large periods. We show how a mechanism for their occurrence in piecewise-defined maps is the simultaneous collision of fixed (or periodic) points with the switching boundary. For the one-dimensional case, the sign of the eigenvalues associated with the colliding fixed points determines the possible bifurcation scenarios. When they are attracting, we show how the two typical bifurcation structures, so-called period incrementing and period adding, occur if they have different sign or both are positive, respectively. Providing rigorous arguments, we also conjecture sufficient conditions for their occurrence in two-dimensional piecewise-defined maps. In addition, we also apply these results to first and second order systems controlled with relays, systems in slide-mode control. In the second part of this thesis, we discuss global aspects of piecewise-defined Hamiltonian systems. These are piecewise-defined systems such that, when restricted to each domain given in its definition, the system is Hamiltonian. We first extend classical Melnikov theory for the case of one degree of freedom under periodic non-autonomous perturbations. We hence provide sufficient conditions for the persistence of subharmonic orbits and for the existence of transversal heteroclinic/homoclinic intersections. The crucial tool to achieve this is the so-called impact map, a regular map for which classical theory of dynamical systems can be applied. We also extend these sufficient conditions to the case when the trajectories are forced to be discontinuous by means of restitution coefficient simulating a loss of energy at the impacts. As an example, we apply our results to a system modeling the dynamical behaviour of a rocking block. Finally, we also consider the coupling of two of the previous systems under a periodic perturbation: a two and a half degrees of freedom piecewise-defined Hamiltonian system. By means of a similar technique, we also provide sufficient conditions for the existence of transversal intersections between stable and unstable manifolds of certain invariant manifolds when the perturbation is considered. In terms of the rocking blocks, these are associated with the mode of movement given by small amplitude rocking for one block while the other one follows large oscillations of small frequency. This heteroclinic intersections allow us to define the so-called scattering map, which links asymptotic dynamics in the invariant manifolds through heteroclinic connections. It is the essential tool in order to construct a heteroclinic skeleton which, when followed, can lead to the existence of Arnold diffusion: trajectories that, in large time scale destabilize the system by further accumulating energy.