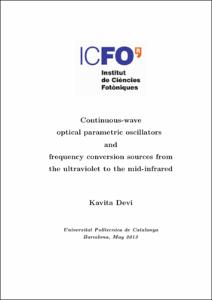 Show full item record
Devi, Kavita
Tutor / directorEbrahim-Zadeh, Majid
Chair / Department / Institute
Universitat Politècnica de Catalunya. Institut de Ciències Fotòniques
Document typeDoctoral thesis
PublisherUniversitat Politècnica de Catalunya
Rights accessOpen Access
Abstract
High-power, continuous-wave (cw) optical parametric oscillators (OPOs), from the ultraviolet (UV) and visible to the near- and mid-infrared (IR) wavelength range, are of interest for a variety of applications such as spectroscopy, trace-gas detection and remote sensing. As such, it is desired to investigate OPOs and different frequency conversion techniques, to cover the spectral regions that are inaccessible to lasers, and that too in a compact and low-cost design. This thesis presents the development of high-power cw OPOs, and frequency conversion sources, spanning the UV to mid-IR spectral range, employing different designs, experimental configurations and nonlinear crystals, making them compact and cost-effective. Commercial high-power cw lasers at 1940 nm, 1064 nm and 532 nm have been exploited as the pump sources, in the work presented in this thesis. We have demonstrated a fiber-based cw source at 970 nm, in a simple and practical design. Using direct single-pass second-harmonic-generation (SHG), 13.1 W of output power at 970 nm has been generated in a high-beam-quality, narrow-linewidth, linearly-polarized beam. Further, a technique based on the use of an antiresonant ring (ARR) interferometer for the attainment of optimum output coupling in a cw singly-resonant OPO has been investigated. The technique was deployed in a Yb-fiber-laser-pumped cw OPO based on MgO:PPLN. To extend the tunability of the 1-µm-pumped OPO from the mid-IR to near-IR, SHG of the intracavity signal has been performed in fanout-grating MgO:sPPLT. This compact cw source, tunable across 775¿807 nm, provides >3 W of near-infrared power across 56% of SHG tuning range, in high spatial beam quality. We have also generated output in the UV, down to 355 nm, using single-pass configuration based on sum-frequency-generation of fundamental at 1064 nm and the generated SHG at 532 nm, in BiB3O6. Further, we demonstrated an architecture comprising two cw OPOs coupled together with an ARR interferometer, generating two pairs of signal and idler wavelengths, that can be independently and arbitrarily tuned to indefinitely close spacing, through degeneracy, and beyond, across the wavelength range of 870-1370 nm. The OPOs, based on identical MgO:sPPLT crystals, were pumped by a single cw laser at 532 nm. On the other hand, we also demonstrated active mode-locking of cw OPOs using direct low-frequency electrooptic phase-modulation (EOM), opening up the possibility of avoiding the need for ultrafast laser sources and synchronous pumping. We have generated picosecond pulses in doubly- and singly-resonant configuration. Also, a technique based on the deployment of the EOM in combination with an ARR interferometer internal to the cw OPO has been investigated for active modelocking.
CitationDevi, K. Continuous-wave optical parametric oscillators and frequency conversion sources from the ultraviolet to the mid-infrared. Tesi doctoral, UPC, Institut de Ciències Fotòniques, 2013. Available at: <http://hdl.handle.net/2117/95152>
URIhttp://hdl.handle.net/2117/95152
DLB 5028-2014
Collections
Share: