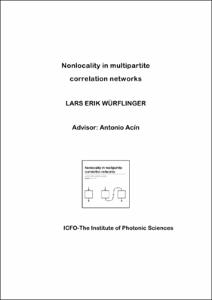 Show full item record
Würflinger, Lars Erik
Tutor / directorAcín dal Maschio, Antonio
Chair / Department / Institute
Universitat Politècnica de Catalunya. Institut de Ciències Fotòniques
Document typeDoctoral thesis
PublisherUniversitat Politècnica de Catalunya
Rights accessOpen Access
Abstract
Despite the success of quantum mechanics in predicting the outcomes of experiments in many branches of physics, the foundations of the theory have remained subject of research and dispute. At the basis of this struggle with the theory lie the phenomena of nonlocality and entanglement. Since it was first predicted by Bell in 1964, nonlocality was not only verified in numerous experiments, but also identified as a useful resource for quantum information processing. Thus, the study of nonlocality is important both from a fundamental point of view and with respect to new applications in quantum information theory, such as secure cryptography and randomness generation. The identification of entanglement as a resource for quantum information led to a strong theoretical effort devoted to its characterisation and detection. Many of the resulting mathematical tools find application in several domains of physics. Although the only known way to create nonlocal correlations is to measure entangled quantum systems, it has been shown that entanglement and nonlocality constitute two inequivalent properties. Therefore, in the light of the success of entanglement theory, it is of interest to also devise a resource theory of nonlocality. The task of this thesis is to develop such a theoretical framework for the characterisation of nonlocality as a resource. To gain a better understanding of nonlocal correlations it will be necessary to investigate correlation scenarios that go beyond the situation originally considered by Bell. In doing so, this thesis provides new description of nonlocality that also have implications for the characterisation of quantum correlations and the detection of new forms of nonlocality. The first question we address is how nonlocality can consistently be defined in a scenario of arbitrarily many parties that may collaborate among each other. To this end we recognise which are the allowed physical operations in this situation and then define nonlocality as the resource that cannot be created by these operations. Our approach shows that the conventional definition of multipartite nonlocality, adopted by the community so far, is inconsistent with this operational definition; we further propose and analyse new models that do not suffer from these inconsistencies. Furthermore, we show that our findings have implications for the characterisation of quantum correlations. A recent approach to describe the set of quantum correlation consists in using principles inspired from information theory. By using a special instance of the models we defined earlier we show a fundamental limitation of this approach: no bipartite information principle is sufficient to single out the set of quantum correlations from the set of nonsignalling correlations. We then developed a description of nonlocality in an even more generalised scenario of several parties. Motivated by a result of Popescu we study scenarios where the parties are allowed to perform not only a single but sequences of measurements on their systems. Characterising nonlocality also in this scenario in operational terms and defining local models compatible with this definition, we show that a new form of nonlocality can be detected Lastly, we examine the problem of detecting the presence of nonlocality in a multipartite scenario when one is given only partial access to the global system. We find that one can verify that the total system must display nonlocality, even though the accessible subsystems only exhibit local correlations.
CitationWürflinger, L.E. Nonlocality in multipartite correlation networks. Tesi doctoral, UPC, Institut de Ciències Fotòniques, 2013. Available at: <http://hdl.handle.net/2117/95141>
URIhttp://hdl.handle.net/2117/95141
DLB 5048-2014
Collections
Share: