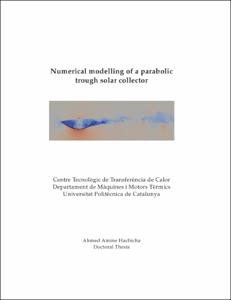 Chair / Department / Institute
Universitat Politècnica de Catalunya. Departament de Màquines i Motors Tèrmics
Document typeDoctoral thesis
PublisherUniversitat Politècnica de Catalunya
Rights accessOpen Access
Abstract
Concentrated Solar Power (CSP) technologies are gaining increasing interest in electricity generation due to the good potential for scaling up renewable energy at the utility level. Parabolic trough solar collector (PTC) is economically the most proven and advanced of the various CSP technologies. The modelling of these devices is a key aspect in the improvement of their design and performances which can represent a considerable increase of the overall efficiency of solar power plants. In the subject of modelling and improving the performances of PTCs and their heat collector elements (HCEs), the thermal, optical and aerodynamic study of the fluid flow and heat transfer is a powerful tool for optimising the solar field output and increase the solar plant performance. This thesis is focused on the implementation of a general methodology able to simulate the thermal, optical and aerodynamic behaviour of PTCs. The methodology followed for the thermal modelling of a PTC, taking into account the realistic non-uniform solar heat flux in the azimuthal direction is presented. Although ab initio, the finite volume method (FVM) for solving the radiative transfer equation was considered, it has been later discarded among other reasons due to its high computational cost and the unsuitability of the method for treating the finite angular size of the Sun. To overcome these issues, a new optical model has been proposed. The new model, which is based on both the FVMand ray tracing techniques, uses a numerical-geometrical approach for considering the optic cone. The effect of different factors, such as: incident angle, geometric concentration and rim angle, on the solar heat flux distribution is addressed. The accuracy of the new model is verified and better results than the Monte Carlo Ray Tracing (MCRT) model for the conditions under study are shown. Furthermore, the thermal behaviour of the PTC taking into account the nonuniform distribution of solar flux in the azimuthal direction is analysed. A general performance model based on an energy balance about the HCE is developed. Heat losses and thermal performances are determined and validated with Sandia Laboratories tests. The similarity between the temperature profile of both absorber and glass envelope and the solar flux distribution is also shown. In addition, the convection heat losses to the ambient and the effect of wind flow on the aerodynamic forces acting on the PTC structure are considered. To do this, detailed numerical simulations based on Large Eddy simulations (LES) are carried out. Simulations are performed at two Reynolds numbers of ReW1 = 3.6 × 105 and ReW2 = 1 × 106. These values corresponds to working conditions similar to those encountered in solar power plants for an Eurotrough PTC. The study has also considered different pitch angles mimicking the actual conditions of the PTC tracking mechanism along the day. Aerodynamic loads, i.e. drag and lift coefficients, are calculated and validatedwith measurements performed in wind tunnels. The indepen-dence of the aerodynamic coefficients with Reynolds numbers in the studied range is shown. Regarding the convection heat transfer taking place around the receiver, averaged local Nusselt number for the different pitch angles and Reynolds numbers have been computed and the influence of the parabola in the heat losses has been analysed. Last but not the least, the detailed analysis of the unsteady forces acting on the PTC structure has been conducted by means of the power spectra of several probes. The analysis has led to detect an increase of instabilities when moving the PTC to intermediate pitch angles. At these positions, the shear-layers formed at the sharp corners of the parabola interact shedding vortices with a high level of coherence. The coherent turbulence produces vibrations and stresses on the PTC structure which increase with the Reynolds number and eventually, might lead to structural failure under certain conditions.
Description
Premi extraordinari doctorat curs 2012-2013, àmbit d’Enginyeria Industrial
CitationHachicha, A.A. Numerical modelling of a parabolic trough solar collector. Tesi doctoral, UPC, Departament de Màquines i Motors Tèrmics, 2013. Available at: <http://hdl.handle.net/2117/95129>
Award-winningAward-winning
URIhttp://hdl.handle.net/2117/95129
DLB 5035-2014
Collections
Share: