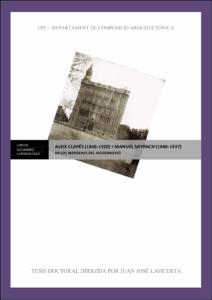 The thesis shows the first monographs of Aleix Clapés and Manuel Sayrach, two important individuals of Catalonian culture, whose works were developed between 1880 and 1937; a long period which saw many importan historical events take place which were reflected in their work. These works on their merit alone, deserve a level of careful attention which they have never before received . This is the principal jusfitication of this thesis and the core reason why both bodies of work have been united within the scope of a single study. But there are other important parallels between them : Originality, anachronism, stylish ambiguity and extravagance; common characteristichs that allow us to understand a priori the problems faced by historians when trying to classify and interpret these works : They are such outsiders of the traditional catalogue of modern style that they are paid little attention. Nevertheless, there is another important connection between them : Antoni Gaudi. Competitor, close friend and colleague in important projects for Clapés; while for Sayrach, a mythical and inspirational figure , against whom he contrasted his works and architectural theories.lf we consider the difficulty with which the extraordinarily creative output of Gaudi was taken on board by the traditionally conservative local historiography, then the works of Clapés and Sayrach, being so close both formally and ideologically to those of Gaudi come up against a similar, but even greater, problem in that is not easy to place into the historiography of Catalonian art works that, while eccentric, are also "inferior" to those of Gaudi. For this reason , our theory distances its elf from the conventions of the traditional discourse of modernism with the ¡ntention of getting closer to the historical truth. This new perspective allows the works and their authors to be truly considered artistic productions of great value and worthy of protection. The abundance of mentions and commentaries about Clapés' work in the contemporary press demonstrates that our initial hypotesis was correct: Clapés' place in history is merely a pale shadow of the real individual in his time and in his world . On the other hand , ¡nterest is awakened more and more in "casa Sayrach", the main work of Sayrach which highlights the disconnect between the role given to him by history and the authentic dimension of the individual. Aleix Clapés (1846-1920) and Manuel Sayrach (1886-1937) were born and died in the province of Barcelona. They followed different reative, literary and cultural activities . Aleix Clapés with his pictures , advanced the local syrnbolism and he can be considered expressionist avant la lettre. The preflerence that Eusebi Güell and Pere Mila gave to his pictorial work, expresses de high esteem in which he was held by the Catalonian bourgeois. Clapés also designed the furniture for the entrance and living room for the Ibarz family (1902), the most powerful and beautiful of Catalonian syrnbolism, and in addition , bought and ran the influential magazine publication "Hispania" in its second period (1903). Manuel Sayrach, received the title of architect in 1917, when he had already reformed the family retreat known as "La Torre dels dimonis" (Sant Feliu de Llobregat, Barcelona , 1909-1913) and when he was finishing building the "casa Sayrach" (Barcelona, 1914-1918). Some years later, Sayrach built the "casa Montserrat" (Barcelona , 1926). He also conceived a dramatic project: "Els drames de la llum", from this project Sayrach published "Abelard i Eloïsa" (1919) and "Reigzel" (1920). He entered the field of political ideology with his work "República i Constitució" (1931).