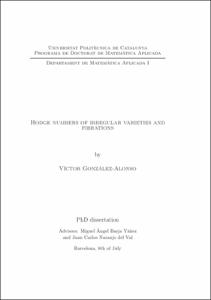 ; Naranjo del Val, Juan Carlos
Chair / Department / Institute
Universitat Politècnica de Catalunya. Departament de Matemàtica Aplicada I
Document typeDoctoral thesis
PublisherUniversitat Politècnica de Catalunya
Rights accessOpen Access
Abstract
In this thesis we study the geography of irregular complex projective (or compact Kähler) varieties, paying special attention to the existence of fibrations. The thesis is divided into two parts. In the first one we consider irregular varieties of arbitrary dimension, looking for bounds for the Hodge numbers in the absence of fibrations. In first place, by truncating the BGG complex of the variety (an object recently introduced by Lazarsfeld and Popa), we get lower bounds on the partial Euler characteristics. In order to improve these first results, we define the higher-rank derivative complexes (generalizing the derivative complex introduced by Green and Lazarsfeld). We study their exactness by means of the Eagon-Northcott complexes, and we obtain some inequalities between the Hodge numbers of varieties admitting some kind of subspaces of 1-forms (¿non-degenerate subspaces¿). In the case of subvarieties of Abelian varieties, the existence of non-degenerate subspaces of any dimension allows us to obtain better inequalities than in the general case. In the case of h^(2,0), a different method gives a much better result. In fact, the bound is much stronger, and the only hypothesis needed is the non-existence of higher irrational pencils (a priori, less restrictive than the existence of non-degenerate subspaces). To close, using the Grassmannian BGG complex (a generalization of the BGG complex that aggregates all the higher-rank derivative complexes) and computing the Chern classes of its last cokernel, we recover the same bound for h^(2,0) using the general results mentioned in the previous paragraph. In the second part, the scope is restricted to surfaces fibred over a curve. We look for upper bounds for the relative irregularity in terms of properties of the general fibre, in the spirit of the inequality obtained by Xiao for non-isotrivial fibrations over a rational curve. Xiao conjectured the same inequality to hold for fibrations over any base, but Pirola found a counterexample. After that, a corrected conjecture was proposed. The result obtained in this thesis is a bound depending on the genus and the Clifford index of a general fibre, which coincides with the corrected conjecture in the case of maximal Clifford index. We have used several techniques in our proof. On the one hand, the ¿adjoint images¿ play a crucial role. The adjoint images were introduced by Collino and Pirola to study infinitesimal deformations of smooth curves, and generalized later by Pirola and Zucconi to higher-dimensional varieties. In this thesis we construct the ¿global adjoint map¿, which allows to find subspaces with vanishing adjoint image assuming that the kernel of the infinitesimal deformation has dimension (at least) half the genus of the cruve. More generally, the global adjoint map can also be defined for infinitesimal deformations of irregular varieties of any dimension, and allows to find numerical conditions that guarantee the existence of subspaces with vanishing adjoint. On the other hand, we have extended to arbitrary (one-dimensional) families of curves some well-stablished concepts of infinitesimal deformations, related with the bicanonical embedding of the curve. As the global adjoint map, some of these constructions can also be extended to families of irregular varieties of arbitrary dimension. Finally, all these previous constructions lead to a structural result for fibrations supported on a relatively rigid divisor. With this result we can treat some cases of the conjecture of Xiao. The remaining cases are solved using an inequality for the rank of an infinitesimal deformation in terms of a supporting divisor (its degree and the dimension of its complete linear series). This inequality, which we reprove, is originally due to Ginensky.
CitationGonzález Alonso, V. Hodge numbers of irregular varieties and fibrations. Tesi doctoral, UPC, Departament de Matemàtica Aplicada I, 2013. Available at: <http://hdl.handle.net/2117/95079>
URIhttp://hdl.handle.net/2117/95079
DLB. 3922-2014
Collections
Share: