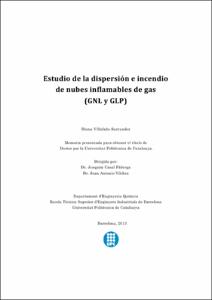 ; Vílchez Sánchez, Juan Antonio
Chair / Department / Institute
Universitat Politècnica de Catalunya. Departament d'Enginyeria Química
Document typeDoctoral thesis
PublisherUniversitat Politècnica de Catalunya
Rights accessOpen Access
Abstract
This thesis is focuses on the study of the dispersion and combustion of a vapor cloud resulting from the escape of LNG and LPG. The consumption of natural gas and LPG is clearly growing, and is based on multiple storage facilities and different types of transport. The possibility of a release and the subsequent vapor cloud formation is significant. The application of appropriate measures to ensure safety in terminals and facilities related to these products is essential to the community safety. An important aspect is the management of the emergency once the cloud has reached the stationary state (the time to reach this state depends on wind velocity, but is usually very short). In this situation, any information about the position of the flammable region of the cloud can be very helpful. A historical analysis of accidents involving vapor cloud fires has been carried out. 176 accidents have been analyzed, which have yielded information on the causes, origins and consequences of such events. A dispersion safety factor (DSF) has been proposed as a tool to help in the decision process under these circumstances. The parameter DSF is the ratio between the distance reached by the lower flammability limit and that of the visible cloud. The results obtained for the dispersion safety factor with the DEGADIS code agree fairly well with the evidence from experimental data obtained at large scale. This factor is strongly dependent on the atmospheric relative humidity. Thus, when high relative humidity prevails, the cloud will be visible for some distance beyond the flammable region (DSF < 1). When the relative humidity in the air is low, the flammable region extends beyond the visible cloud contour (DSF > 1). In this case, the flammable vapor cloud will not be visible at the location of any potential ignition source. Two expressions have been proposed to estimate the parameter DSF for a release of LNG according to the range of HR. The same treatment has also been applied to the case of a spill of liquefied propane gas cooled at atmospheric pressure. With respect to the combustion of the flammable vapor cloud, a new expression has been obtained, which determines the flame speed as a function of the wind speed, based on various large scale tests conducted with LNG between 1968 and 1982; this expression gives a better fit for high wind speeds. A relatively simple model of the flash fire has been developed based on the dispersion of the cloud as a function of fuel properties and atmospheric conditions (stability and wind velocity). The size of the flames will depend on the size of the cloud, being higher that the latter. It has been observed from the available data experiments, that the flame height increases proportionally to the visible cloud.
CitationVillafañe S., D. Estudio de la dispersión e incendio de nubes inflamables de gas (GNL y GLP). Tesi doctoral, UPC, Departament d'Enginyeria Química, 2013. Available at: <http://hdl.handle.net/2117/95056>
URIhttp://hdl.handle.net/2117/95056
DLB. 3940-2014
Collections
Share: