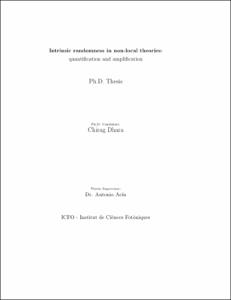 Show full item record
Dhara, Chirag
Tutor / directorAcín dal Maschio, Antonio
Chair / Department / Institute
Universitat Politècnica de Catalunya. Institut de Ciències Fotòniques
Document typeDoctoral thesis
PublisherUniversitat Politècnica de Catalunya
Rights accessOpen Access
Abstract
Quantum mechanics was developed as a response to the inadequacy of classical physics in explaining certain physical phenomena. While it has proved immensely successful, it also presents several features that severely challenge our classicality based intuition. Randomness in quantum theory is one such and is the central theme of this dissertation. Randomness is a notion we have an intuitive grasp on since it appears to abound in nature. It a icts weather systems and nancial markets and is explicitly used in sport and gambling. It is used in a wide range of scienti c applications such as the simulation of genetic drift, population dynamics and molecular motion in fluids. Randomness (or the lack of it) is also central to philosophical concerns such as the existence of free will and anthropocentric notions of ethics and morality. The conception of randomness has evolved dramatically along with physical theory. While all randomness in classical theory can be fully attributed to a lack of knowledge of the observer, quantum theory qualitatively departs by allowing the existence of objective or intrinsic randomness. It is now known that intrinsic randomness is a generic feature of hypothetical theories larger than quantum theory called the non-signalling theories. They are usually studied with regards to a potential future completion of quantum mechanics or from the perspective of recognizing new physical principles describing nature. While several aspects have been studied to date, there has been little work in globally characterizing and quantifying randomness in quantum and non-signalling theories and the relationship between them. This dissertation is an attempt to ll this gap. Beginning with the unavoidable assumption of a weak source of randomness in the universe, we characterize upper bounds on quantum and non-signalling randomness. We develop a simple symmetry argument that helps identify maximal randomness in quantum theory and demonstrate its use in several explicit examples. Furthermore, we show that maximal randomness is forbidden within general non-signalling theories and constitutes a quantitative departure from quantum theory. We next address (what was) an open question about randomness ampli cation. It is known that a single source of randomness cannot be ampli ed using classical resources alone. We show that using quantum resources on the other hand allows a full ampli cation of the weakest sources of randomness to maximal randomness even in the presence of supra-quantum adversaries. The signi cance of this result spans practical cryptographic scenarios as well as foundational concerns. It demonstrates that conditional on the smallest set of assumptions, the existence of the weakest randomness in the universe guarantees the existence of maximal randomness. The next question we address is the quanti cation of intrinsic randomness in non-signalling correlations. While this is intractable in general, we identify cases where this can be quanti ed. We nd that in these cases all observed randomness is intrinsic even relaxing the measurement independence assumption. We nally turn to the study of the only known resource that allows generating certi able intrinsic randomness in the laboratory i.e. entanglement. We address noisy quantum systems and calculate their entanglement dynamics under decoherence. We identify exact results for several realistic noise models and provide tight bounds in some other cases. We conclude by putting our results into perspective, pointing out some drawbacks and future avenues of work in addressing these concerns.
CitationDhara, C. Intrinsic randomness in non-local theories: quantification and amplification. Tesi doctoral, UPC, Institut de Ciències Fotòniques, 2013. Available at: <http://hdl.handle.net/2117/95044>
URIhttp://hdl.handle.net/2117/95044
DLB. 3855-2014
Collections
Share: