Design of a distributed memory unit for clustered microarchitectures 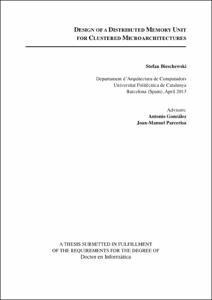 Chair / Department / Institute
Universitat Politècnica de Catalunya. Departament d'Arquitectura de Computadors
Document typeDoctoral thesis
PublisherUniversitat Politècnica de Catalunya
Rights accessOpen Access
Abstract
Power constraints led to the end of exponential growth in single–processor performance, which characterized the semiconductor industry for many years. Single–chip multiprocessors allowed the performance growth to continue so far. Yet, Amdahl’s law asserts that the overall performance of future single–chip multiprocessors will depend crucially on single–processor performance. In a multiprocessor a small growth in single–processor performance can justify the use of significant resources. Partitioning the layout of critical components can improve the energy–efficiency and ultimately the performance of a single processor. In a clustered microarchitecture parts of these components form clusters. Instructions are processed locally in the clusters and benefit from the smaller size and complexity of the clusters components. Because the clusters together process a single instruction stream communications between clusters are necessary and introduce an additional cost. This thesis proposes the design of a distributed memory unit and first level cache in the context of a clustered microarchitecture. While the partitioning of other parts of the microarchitecture has been well studied the distribution of the memory unit and the cache has received comparatively little attention. The first proposal consists of a set of cache bank predictors. Eight different predictor designs are compared based on cost and accuracy. The second proposal is the distributed memory unit. The load and store queues are split into smaller queues for distributed disambiguation. The mapping of memory instructions to cache banks is delayed until addresses have been calculated. We show how disambiguation can be implemented efficiently with unordered queues. A bank predictor is used to map instructions that consume memory data near the data origin. We show that this organization significantly reduces both energy usage and latency. The third proposal introduces Dispatch Throttling and Pre-Access Queues. These mechanisms avoid load/store queue overflows that are a result of the late allocation of entries. The fourth proposal introduces Memory Issue Queues, which add functionality to select instructions for execution and re-execution to the memory unit. The fifth proposal introduces Conservative Deadlock Aware Entry Allocation. This mechanism is a deadlock safe issue policy for the Memory Issue Queues. Deadlocks can result from certain queue allocations because entries are allocated out-of-order instead of in-order like in traditional architectures. The sixth proposal is the Early Release of Load Queue Entries. Architectures with weak memory ordering such as Alpha, PowerPC or ARMv7 can take advantage of this mechanism to release load queue entries before the commit stage. Together, these proposals allow significantly smaller and more energy efficient load queues without the need of energy hungry recovery mechanisms and without performance penalties. Finally, we present a detailed study that compares the proposed distributed memory unit to a centralized memory unit and confirms its advantages of reduced energy usage and of improved performance.
CitationBieschewski, S. Design of a distributed memory unit for clustered microarchitectures. Tesi doctoral, UPC, Departament d'Arquitectura de Computadors, 2013. Available at: <http://hdl.handle.net/2117/95043>
URIhttp://hdl.handle.net/2117/95043
DLB. 3852-2014
Collections
Share: