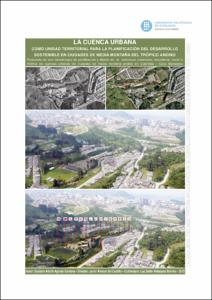 This doctoral research proposes a model of sustainable planning, based on territorial units called urban basins in cities (Manizales Case), in the middle mountains of Colombian Andean tropics. From the context of research and state of the art, the Colombian nation has been characterized by a land based on the possession of the conquered land, then legal guidelines of the Spanish Crown later political agreements - administration during the Republic and in the Today the dichotomy of the Colombian State with its virtual borders, internal conflict that has more than half a century, makes it difficult to land proposal. But dealing with the question LOT (Land Use Law), to address the environmental complexity of Colombian territory and leaves open the possibility of proposing distribution models and spatial planning. The Andean intermediate city, located on the mountain of the South American Andes makes it very special and is no stranger to the situation above, despite his foundational process obeys the nineteenth century, requires alternatives to land use. These cities in mountains with steep slopes, generally inaccessible, susceptible to natural processes such as rain and weather events, floods, droughts, and especially geodynamic situations as suitable soil structural faults to landslides, demanding proposals that fit their characteristics geographical and territorial occupancy modeling. The watershed transformation in urban basins, is a historical process and technology that humanity has been growing, and changing the natural ecosystem and make himself therefore factors such as urbanization, agricultural production, the location of human settlements on the periphery of urban watersheds of cities, causing anthropic phenomena, incorporating contaminated discharges of river channels, which are then translated into poor and expensive drinking water treatment in cities. The urban watershed on its slopes, facing social, territorial expansion processes conurbation, social, economic incoherent determinants in transforming ecosystems in the mountain city, among other destabilizing forces, call for reflection, to propose physical model spatial planning, integrating ecosystem and culture, where the water structure is the key linchpin in the process of life, to make sustainable urban watersheds, territorial units for the mid-mountain city of Andean tropics.