Monitoring and geomorphologic characterization of debris flows at catchment scale 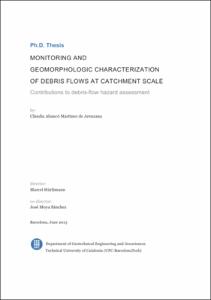 Debris flows are very fast mass movements and are considered as one of the most hazardous phenomenain mountainous regions. Research on this field has strongly improved during the last decades. However,many open questions remain concerning the details of the triggering mechanisms of this type of phenomena and their dynamic behaviour; both of them key points in the hazard assessment. The global purpose of this work is to improve some aspects of the debris-flow hazard assessment atcatchment scale; particularly the estimation of the events¿ magnitude, the determination of their intensity and the characterization of the triggering factors. Most of the objectives have been carried out by means of the auscultation of a catchment in wich the debris flows are frequent. Furthermore, data of geomorphological characterization of other catchments have been analysed. This work aims at increasing the knowledge on debris flows in the Pyrenees. In the context of this thesis, a debris-flow monitoring system has been set up in the Pyrenees, in the Rebaixader torrent (Alta Ribagorça, Central Pyrenees). Since July 2009, six debris flows involving volumes ranging from 1000 to 21000 m3, eleven debris floods (volumes from 350 to 2800 m3) and four rockfalls have been registered. The distinction between processes and the identification of the different phases of the flow events have mainly been based on ground vibration data. The detailed analysis of the ground vibration generated by torrential processes has revealed that there are several on-site factors strongly influencing the signal registered by the geophones. In particular, a significant decrease of the signal has been recognized at the geophones that were not placed close to the active channel. The ground vibration signal generated by some debris-flow events has not only been registered using the conventional digital sampling of the ground velocity signal, but also by means of transforming the ground velocity into impulses. Both techniques are suitable for the detection and characterization of the debris-flow events. However, the transformation into impulses shows interesting advantages, such as the low power consumption and the simplicity of the analysis of this type of signal in comparison to the conventional one. Both aspects are crucial in early warning and alarm systems (EWAS). Besides, the characterization of the rainfalls in the catchment has revealed that the most common debris-flow triggering rainfalls in the Rebaixader torrent last around 2 hours and the critical hourly intensity value is around 15 mm/h. However, it has been detected that also spring episodes of moderate intensity, accompanied by the potential infiltration from snowmelt can trigger torrential flows and rockfalls. In particular, a detailed analysis of three rockfalls that occurred in spring is presented. Moreover, a methodology to estimate the entrainment of bed material in a debris-flow event is presented within this study. The methodology was based on the creation of a decision tree (applying data mining techniques) over a database of geomorphologic parameters, collected in the field and from a digital elevation model, which incorporates 110 reaches from 17 torrents. Finally, a general decision tree was proposed that should be calibrated and adapted, in order to widen its application to other catchments and climatic regions.
CitationAbanco Martínez de Arenzana, C. "Monitoring and geomorphologic characterization of debris flows at catchment scale". Tesi doctoral, UPC, Departament d'Enginyeria del Terreny, Cartogràfica i Geofísica, 2013. Available at: <http://hdl.handle.net/2117/95034>
URIhttp://hdl.handle.net/2117/95034
DLB. 3846-2014