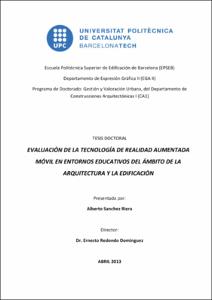 Chair / Department / Institute
Universitat Politècnica de Catalunya. Departament de Construccions Arquitectòniques I
Document typeDoctoral thesis
PublisherUniversitat Politècnica de Catalunya
Rights accessOpen Access
Abstract
This thesis aims to address the implementation of Augmented Reality (AR) technology in a teaching context by using mobile devices (hand held).Laptops , tablets and mobile devices were used with the two most common operating systems (IOS and Android). Specifics contents and evaluation methodologies have been developed in the field of architecture and building engineering, where this technology which is relatively recent, and mainly based on overlapping information to an object or a real environment, offers potential advantages in the training processes of future professionals in this field. With this purpose, the following issues have been addressed: . Those theoretical foundations considered relevant for the understanding and operation of the technology. . The introduction of new teaching methods through mobile devices , based on AR technology in educational contexts. Involving students in the creation of virtual content using various existing Augmented Reality applications and an application own developed. . The evaluation of the degree of satisfaction, efficiency and effectiveness of the courses. All these concepts linked to usability. . The improvement of students' academic performance. The essay has been structured in two blocks: The first one starts by specifying the pedagogical and educational foundation that has motivated this thesis. lt then goes on to describe the methodology used in the evaluation of the courses. And finally, still in this block, a general framework of technology is established. It explores various theoretical keys that have been considered relevant, ranging from the definition of the AR concept to the current state of systems and software used in various fields . The second block, which constitutes the practical part of this thesis, addresses the implementation of AR technology in learning environments through different case studies. To this end the two most common systems in mobile devices have been used: Optical recognition and GPS based. In regard to the evaluation of the technology there are two consecutive lines: Systems usability assessment, according to ISO 9241 -11 . Thus, from the responses to 127 specific questionnaires, indicators are constructed using multivariate analysis techniques, which illustrate the situation of each student by comparison with the rest. It allowed a useful approach to the study and it helped to obtain more objective conclusions. For the evaluation of academic performance, held in the last two courses , students were divided into experimental and control groups. Assessment was carried out from PRE-TEST and POST-TEST scores. In total, 171 students (55 from the two experimental groups) were evaluated. Due to the reduced samples a statistical procedure was used based on the Sludent's t distribution. Through the p value (statistical significance) returned , we established the likelihood of group's scores being coincident or not before and after workouts. The teaching experiences described and the results extracted from the questionnaires allowed to verify the feasibility of using this technology in the fields mentioned. Either as an alternative tool or complementary to traditional methodologies, and where students get ¡nvolved and participate dynamically in their own learning process. In addition, results reflect a significant improvement in the overall performance of students from experimental courses compared to students from the control groups, who did not use the technology. Finally, this paper puts forward the development of future work, such as future improvements of the application developed and the use of this technology aimed at the rehabilitation and maintenance of buildings.
CitationSánchez Riera, A. Evaluación de la tecnología de realidad aumentada móvil en entronos educativos del ámbito de la arquitectura y la edificación. Tesi doctoral, UPC, Departament de Construccions Arquitectòniques I, 2013. Available at: <http://hdl.handle.net/2117/95033>
URIhttp://hdl.handle.net/2117/95033
DLB. 3874-2014
Collections
Share: