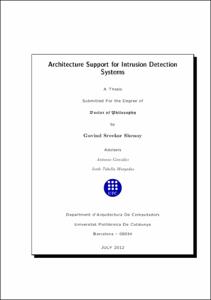 Chair / Department / Institute
Universitat Politècnica de Catalunya. Departament d'Arquitectura de Computadors
Document typeDoctoral thesis
PublisherUniversitat Politècnica de Catalunya
Rights accessOpen Access
Abstract
System security is a prerequisite for efficient day-to-day transactions. As a consequence, Intrusion Detection Systems (IDS) are commonly used to provide an effective security ring to systems in a network. An IDS operates by inspecting packets flowing in the network for malicious content. To do so, an IDS like Snort[49] compares bytes in a packet with a database of prior reported attacks. This functionality can also be viewed as string matching of the packet bytes with the attack string database. Snort commonly uses the Aho-Corasick algorithm[2] to detect attacks in a packet. The Aho-Corasick algorithm works by first constructing a Finite State Machine (FSM) using the attack string database. Later the FSM is traversed with the packet bytes. The main advantage of this algorithm is that it provides a linear time search irrespective of the number of strings in the database. The issue however lies in devising a practical implementation. The FSM thus constructed gets very bloated in terms of the storage size, and so is area inefficient. This also affects its performance efficiency as the memory footprint also grows. Another issue is the limited scope for exploiting any parallelism due to the inherent sequential nature in a FSM traversal. This thesis explores hardware and software techniques to accelerate attack detection using the Aho-Corasick algorithm. In the first part of this thesis, we investigate techniques to improve the area and performance efficiency of an IDS. Notable among our contributions, includes a pipelined architecture that accelerates accesses to the most frequently accessed node in the FSM. The second part of this thesis studies the resilience of an IDS to evasion attempts. In an evasion attempt an adversary saturates the performance of an IDS to disable it, and thereby gain access to the network. We explore an evasion attempt that significantly degrades the performance of the Aho-Corasick al- gorithm used in an IDS. As a counter measure, we propose a parallel architecture that improves the resilience of an IDS to an evasion attempt. The final part of this thesis explores techniques to exploit the network traffic characteristic. In our study, we observe significant redundancy in the payload bytes. So we propose a mechanism to leverage this redundancy in the FSM traversal of the Aho-Corasick algorithm. We have also implemented our proposed redundancy-aware FSM traversal in Snort.
CitationSreekar Shenoy, G. Architecture support for intrusion detection systems. Tesi doctoral, UPC, Departament d'Arquitectura de Computadors, 2012. Available at: <http://hdl.handle.net/2117/94979>
URIhttp://hdl.handle.net/2117/94979
DLB. 26281-2013
Collections
Share: