On the structure of graphs without short cycles 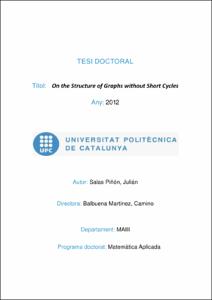 Chair / Department / Institute
Universitat Politècnica de Catalunya. Departament de Matemàtica Aplicada III
Document typeDoctoral thesis
PublisherUniversitat Politècnica de Catalunya
Rights accessOpen Access
Abstract
The objective of this thesis is to study cages, constructions and properties of such families of graphs. For this, the study of graphs without short cycles plays a fundamental role in order to develop some knowledge on their structure, so we can later deal with the problems on cages. Cages were introduced by Tutte in 1947. In 1963, Erdös and Sachs proved that (k, g) -cages exist for any given values of k and g. Since then, large amount of research in cages has been devoted to their construction. In this work we study structural properties such as the connectivity, diameter, and degree regularity of graphs without short cycles. In some sense, connectivity is a measure of the reliability of a network. Two graphs with the same edge-connectivity, may be considered to have different reliabilities, as a more refined index than the edge-connectivity, edge-superconnectivity is proposed together with some other parameters called restricted connectivities. By relaxing the conditions that are imposed for the graphs to be cages, we can achieve more refined connectivity properties on these families and also we have an approach to structural properties of the family of graphs with more restrictions (i.e., the cages). Our aim, by studying such structural properties of cages is to get a deeper insight into their structure so we can attack the problem of their construction. By way of example, we studied a condition on the diameter in relation to the girth pair of a graph, and as a corollary we obtained a result guaranteeing restricted connectivity of a special family of graphs arising from geometry, such as polarity graphs. Also, we obtained a result proving the edge superconnectivity of semiregular cages. Based on these studies it was possible to develop the study of cages. Therefore obtaining a relevant result with respect to the connectivity of cages, that is, cages are k/2-connected. And also arising from the previous work on girth pairs we obtained constructions for girth pair cages that proves a bound conjectured by Harary and Kovács, relating the order of girth pair cages with the one for cages. Concerning the degree and the diameter, there is the concept of a Moore graph, it was introduced by Hoffman and Singleton after Edward F. Moore, who posed the question of describing and classifying these graphs. As well as having the maximum possible number of vertices for a given combination of degree and diameter, Moore graphs have the minimum possible number of vertices for a regular graph with given degree and girth. That is, any Moore graph is a cage. The formula for the number of vertices in a Moore graph can be generalized to allow a definition of Moore graphs with even girth (bipartite Moore graphs) as well as odd girth, and again these graphs are cages. Thus, Moore graphs give a lower bound for the order of cages, but they are known to exist only for very specific values of k, therefore it is interesting to study how far a cage is from this bound, this value is called the excess of a cage. We studied the excess of graphs and give a contribution, in the sense of the work of Biggs and Ito, relating the bipartition of girth 6 cages with their orders. Entire families of cages can be obtained from finite geometries, for example, the graphs of incidence of projective planes of order q a prime power, are (q+1, 6)-cages. Also by using other incidence structures such as the generalized quadrangles or generalized hexagons, it can be obtained families of cages of girths 8 and 12. In this thesis, we present a construction of an entire family of girth 7 cages that arises from some combinatorial properties of the incidence graphs of generalized quadrangles of order (q,q).
CitationSalas Piñón, J. On the structure of graphs without short cycles. Tesi doctoral, UPC, Departament de Matemàtica Aplicada III, 2012. Available at: <http://hdl.handle.net/2117/94975>
URIhttp://hdl.handle.net/2117/94975
DLB. 26278-2013
Collections
Share: