Study, evaluation and contributions to new algorithms for the embedding problem in a network virtualization environment 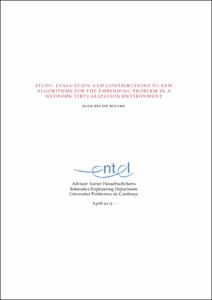 Network virtualization is recognized as an enabling technology for the future Internet. It aims to overcome the resistance of the current Internet to architectural change and to enable a new business model decoupling the network services from the underlying infrastructure. The problem of embedding virtual networks in a substrate network is the main resource allocation challenge in network virtualization and is usually referred to as the Virtual Network Embedding (VNE) problem. VNE deals with the allocation of virtual resources both in nodes and links. Therefore, it can be divided into two sub-problems: Virtual Node Mapping where virtual nodes have to be allocated in physical nodes and Virtual Link Mapping where virtual links connecting these virtual nodes have to be mapped to paths connecting the corresponding nodes in the substrate network. Application of network virtualization relies on algorithms that can instantiate virtualized networks on a substrate infrastructure, optimizing the layout for service-relevant metrics. This class of algorithms is commonly known as VNE algorithms. This thesis proposes a set of contributions to solve the research challenges of the VNE that have not been tackled by the research community. To do that, it performs a deep and comprehensive survey of virtual network embedding. The first research challenge identified is the lack of proposals to solve the virtual link mapping stage of VNE using single path in the physical network. As this problem is NP-hard, existing proposals solve it using well known shortest path algorithms that limit the mapping considering just one constraint. This thesis proposes the use of a mathematical multi-constraint routing framework called paths algebra to solve the virtual link mapping stage. Besides, the thesis introduces a new demand caused by virtual link demands into physical nodes acting as intermediate (hidden) hops in a path of the physical network. Most of the current VNE approaches are centralized. They suffer of scalability issues and provide a single point of failure. In addition, they are not able to embed virtual network requests arriving at the same time in parallel. To solve this challenge, this thesis proposes a distributed, parallel and universal virtual network embedding framework. The proposed framework can be used to run any existing embedding algorithm in a distributed way. Thereby, computational load for embedding multiple virtual networks is spread across the substrate network Energy efficiency is one of the main challenges in future networking environments. Network virtualization can be used to tackle this problem by sharing hardware, instead of requiring dedicated hardware for each instance. Until now, VNE algorithms do not consider energy as a factor for the mapping. This thesis introduces the energy aware VNE where the main objective is to switch off as many network nodes and interfaces as possible by allocating the virtual demands to a consolidated subset of active physical networking equipment. To evaluate and validate the aforementioned VNE proposals, this thesis helped in the development of a software framework called ALgorithms for Embedding VIrtual Networks (ALEVIN). ALEVIN allows to easily implement, evaluate and compare different VNE algorithms according to a set of metrics, which evaluate the algorithms and compute their results on a given scenario for arbitrary parameters.
CitationBotero Vega, J. F. "Study, evaluation and contributions to new algorithms for the embedding problem in a network virtualization environment". Tesi doctoral, UPC, Departament d'Enginyeria Telemàtica, 2013. Available at: <http://hdl.handle.net/2117/94958>
URIhttp://hdl.handle.net/2117/94958
DLB. 25017-2013