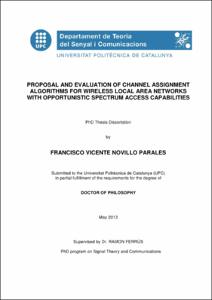 The growing need for wireless connectivity is pushing the massive adoption and usage of Wireless Local Area Networks (WLANs) based on the IEEE 802.11 standard (Wi-Fi), leading to dense deployments of individual, uncoordinated access points (AP) in highly populated areas. By 2016, over half of the world's Internet traffic is expected to come from WLAN connections, according to the latest Cisco® Visual Networking Index (VNI) Forecast (2011-2016). The proliferation of dense deployments causes high interference levels in the unlicensed bands (i.e. ISM bands) available for WLAN operation, which, ultimately, may result in both an unpredictable degradation in network performance and unfairness among APs. Channel assignment mechanisms are the central tool used nowadays for mitigating the interference problems in the ISM band caused by neighboring APs. However, regardless of the ability of different channel assignment algorithms to improve WLAN performance, the amount of available spectrum in unlicensed bands for WLAN use may still constitute a key limiting factor in high dense deployments. In this context, the exploitation of additional portions of the radio spectrum bands that are assigned to a particular application or service but remain unused or unoccupied at specific locations and times can help to further improve the performance of WLANs networks. This spectrum usage concept is known in the literature as Opportunistic Spectrum Access (OSA), where secondary users are allowed to share the same frequencies used by some primary users whenever these primary services are not disturbed. This thesis work has addressed a novel study for OSA-enabled WLANs in which the possibilities and benefits offered by WLANs using OSA capabilities are discussed and quantified. This thesis provides two main contributions. The first contribution is the development of the formulation and assessment of the spatial availability of a certain spectrum segment within indoor locations in dense urban areas in order for it to be opportunistically reused by WLANs. To this end, the interference conditions between primary and secondary users have been established along with the necessary propagation models accounting for outdoor, indoor and outdoor-to-indoor losses. Considering the service area of a primary system devoted to providing outdoor coverage, the proposed model has been used to compute the percentage of indoor locations where the secondary users can actually reuse the primary frequency band without interfering with the primary system. The second contribution is the proposal, development and evaluation of a set of channel assignment algorithms that allow WLANs to operate on available channels in both unlicensed ISM and OSA-enabled spectrum bands. Unlike the classical schemes for legacy WLANs, the proposed algorithms cope with two distinguishing issues arising in the OSA-enabled WLAN channel assignment problem: channel prioritization and spectrum heterogeneity. To that end, a system model is developed to describe and represent the main components involved in an OSA-enabled WLAN scenario. The model allows setting up a network scenario with primary and secondary systems, determining the list of available primary channels for each WLAN and defining the channel assignment constraints for WLANs. From this basis, the thesis has first formulated the channel assignment problem for OSA-enabled WLANs as a Binary Linear Programming (BLP) problem, which has been optimally solved by means of branch-and bound (BB) algorithms and used as a benchmark. Motivated by the need to have more computationally efficient solutions than that offered by the BB algorithm, a number of centralized and distributed heuristic algorithms have been proposed, encompassing simulated annealing (SA) techniques and the construction of minimum spanning tree (MST) graphs to reduce the level of coupling between neighboring APs. The algorithms have been evaluated under different conditions of AP density and spectrum availability and compared to the optimal solution as well as classical algorithms proposed for legacy WLANs.
CitationNovillo Parales, F. V. "Proposal and evaluation of channel assignment algorithms for wireless local area networks with opportunistic spectrum acces capabilities". Tesi doctoral, UPC, Departament de Teoria del Senyal i Comunicacions, 2013. Available at: <http://hdl.handle.net/2117/94942>
URIhttp://hdl.handle.net/2117/94942
DLB. 20551-2013