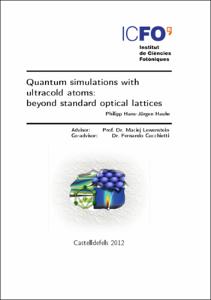 Except where otherwise noted, content on this work is licensed under a Creative Commons license : Attribution-NonCommercial-ShareAlike 3.0 Spain
Abstract
Many outstanding problems in quantum physics, such as high-Tc superconductivity or quark confinement, are still - after decades of research - awaiting commonly accepted explanations. One reason is that such systems are often difficult to control, show an intermingling of several effects, or are not easily accessible to measurement. To arrive at a deeper understanding of the physics at work, researchers typically derive simplified models designed to capture the most striking phenomena of the system under consideration. However, due to the exponential complexity of Hilbert space, even some of the simplest of such models pose formidable challenges to analytical and numerical calculations. In 1982, Feynman proposed to solve such quantum models with experimental simulation on a physically distinct, specifically engineered quantum system [Int. J. Theor.Phys. 21, 467]. Designed to be governed by the same underlying equations as the original model, it is hoped that direct measurements on these so called quantum simulators (QSs) will allow to gather deep insights into outstanding problems of physics and beyond. In this thesis, we identify four requirements that a useful QS has to fulfill, relevance, control, reliability, and efficiency. Focusing on these, we review the state of the art of two popular approaches, digital QSs (i.e., special purpose quantum computers) and analog QSs (devices with always-on interactions). Further, focusing on possibilities to increase control over QSs, we discuss a scheme to engineer quantum correlations between mesoscopic numbers of spinful particles in optical lattices. This technique, based on quantum polarization spectroscopy, may be useful for state preparation and quantum information protocols. Additionally, employing several analytical and numerical methods for the calculation of many-body ground states, we demonstrate the variety of condensed-matter problems that can be attacked with QSs consisting of ultracold ions or neutral atoms in optical lattices. The chosen examples, some of which have already been realized in experiment, include such diverse settings as frustrated antiferromagnetism, quantum phase transitions in exotic lattice geometries, topological insulators, non-Abelian gauge-fields, orbital order of ultracold Fermions, and systems with long-range interactions. The experimental realization of all of these models requires techniques which go beyond standard optical lattices, e.g., time-periodic driving of lattices with exotic geometry, loading ultracold atoms into higher bands, or immersing trapped ions into an optical lattice. The chosen models, motivated by important open questions of quantum physics, pose difficult problems for classical computers, but they may be amenable in the near future to quantum simulation with ultracold atoms or ions. While the experimental control over relevant models has increased dramatically in the last years, the reliability and efficiency of QSs has received considerably less attention. As a second important part of this thesis, we emphasize the need to consider these aspects under realistic experimental conditions. We discuss specific situations where terms that have typically been neglected in the description of the QS introduce systematic errors and even lead to novel physics. Further, we characterize in a generic example the influence of quenched disorder on an analog QS. Its performance for simulating universal behavior near a quantum phase transition seems satisfactory for low disorder. Moreover, our results suggest a connection between the reliability and efficiency of a QS: it works less reliable exactly in those interesting regimes where classical calculations are less efficient. If QSs fulfill all of our four requirements, they may revolutionize our approach to quantum-mechanical problems, allowing to solve the behavior of complex Hamiltonians, and to design nano-scale materials and chemical compounds from the ground up.
CitationHauke, P.H.-J. Quantum simulations with ultracold atoms: beyond standard optical lattices. Tesi doctoral, UPC, Institut de Ciències Fotòniques, 2013. Available at: <http://hdl.handle.net/2117/94917>
URIhttp://hdl.handle.net/2117/94917
DLB. 20546-2013
Collections
Share: