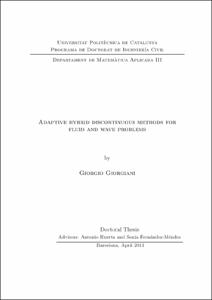 ; Fernández-Méndez, Sonia
Chair / Department / Institute
Escola Tècnica Superior d'Enginyers de Camins, Canals i Ports de Barcelona
Document typeDoctoral thesis
PublisherUniversitat Politècnica de Catalunya
Rights accessOpen Access
Abstract
This PhD thesis proposes a p-adaptive technique for the Hybridizable Discontinuous Galerkin method (HDG). The HDG method is a novel discontinuous Galerkin method (DG) with interesting characteristics. While retaining all the advantages of the common DG methods, such as the inherent stabilization and the local conservation properties, HDG allows to reduce the coupled degrees of freedom of the problem to those of an approximation of the solution de¿ned only on the faces of the mesh. Moreover, the convergence properties of the HDG solution allow to perform an element-by-element postprocess resulting in a superconvergent solution. Due to the discontinuous character of the approximation in HDG, p-variable computations are easily implemented. In this work the superconvergent postprocess is used to de¿ne a reliable and computationally cheap error estimator, that is used to drive an automatic adaptive process. The polynomial degree in each element is automatically adjusted aiming at obtaining a uniform error distribution below a user de¿ned tolerance. Since no topological modi¿cation of the discretization is involved, fast adaptations of the mesh are obtained. First, the p-adaptive HDG is applied to the solution of wave problems. In particular, the Mild Slope equation is used to model the problem of sea wave propagation is coastal areas and harbors. The HDG method is compared with the continuous Galerkin (CG) ¿nite element method, which is nowadays the common method used in the engineering practice for this kind of applications. Numerical experiments reveal that the e¿ciency of HDG is close to CG for uniform degree computations, clearly outperforming other DG methods such as the Compact Discontinuous Galerkin method. When p-adaptivity is considered, an important saving in computational cost is shown. Then, the methodology is applied to the solution of the incompressible Navier-Stokes equations for the simulation of laminar ¿ows. Both steady state and transient applications are considered. Various numerical experiments are presented, in 2D and 3D, including academic examples and more challenging applications of engineering interest. Despite the simplicity and low cost of the error estimator, high e¿ciency is exhibited for analytical examples. Moreover, even though the adaptive technique is based on an error estimate for just the velocity ¿eld, high accuracy is attained for all variables, with sharp resolution of the key features of the ¿ow and accurate evaluation of the ¿uid-dynamic forces. In particular, high degrees are automatically located along boundary layers, reducing the need for highly distorted elements in the computational mesh. Numerical tests show an important reduction in computational cost, compared to uniform degree computations, for both steady and unsteady computations.
CitationGiorgiani, G. Adaptive hybrid discontinuous methods for fluid and wave problems. Tesi doctoral, UPC, Escola Tècnica Superior d'Enginyers de Camins, Canals i Ports de Barcelona, 2013. Available at: <http://hdl.handle.net/2117/94916>
URIhttp://hdl.handle.net/2117/94916
DLB. 20544-2013
Collections
Share: