Analysis and design of an edge-technique-based Doppler wind lidar: practical assessment of a laboratory prototype 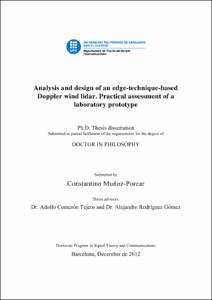 Chair / Department / Institute
Universitat Politècnica de Catalunya. Departament de Teoria del Senyal i Comunicacions
Document typeDoctoral thesis
PublisherUniversitat Politècnica de Catalunya
Rights accessOpen Access
Abstract
This thesis is the initial stage in the development of a range-resolving Doppler wind lidar. Atmospheric lidars emit pulsed laser radiation that after being scattered by air molecules and suspended aerosol particles is partly collected by a telescope, detected by a photoreceiver and analyzed for obtaining information about the state of the illuminated region. The speed of these elements with respect the instrument can be identified with the speed of the wind and it can be therefore measured ¿and this is the way the Doppler wind lidars do it¿¿ from the detection of the frequency shift that due to Doppler effect is undergone by the scattered signal. The selection of the technique used to measure this optical frequency shift ¿the so-called edge-technique¿¿ has been determined in this case mainly by the available laser, the location of the site where the system will be placed and by simplicity considerations. With this technique, the frequency difference between the emitted pulses and the receiver signal is obtained by measuring the change produced in the transmission of an optical filter. In the first part of this work the design of the optical filter devoted to discriminate frequencies and a complete analysis of the performance of a Doppler wind lidar based on the edge-technique operating from the signal scattered by the atmospheric aerosols is proposed. In the first place, a method that permits to calculate, using the precision of the measurements as indicator and the range of measurable velocities as constraint, the best configuration of the optical filter used in the system, in this case a Fabry-Perot interferometer, has been established. Afterwards, the precision, the time resolution, the range resolution and the accuracy of the velocity measurements are analyzed with detail in different typical measuring scenarios and are compared with the performance of other systems currently in operation. Also, the effects on the quality parameters of the velocity measurements of the interfering molecular return component that is unavoidably present in the analyzed aerosol signal is studied. The second part of the thesis is devoted to the design, implementation and assessment of a laboratory prototype based on the edge-technique. The objective of this development is to assess in convenient conditions the implementation of the selected detection technique. This preliminary assembly also permits to characterize and adjust the operation of some of the critical elements and subsystems that will be part of the Doppler wind lidar, such as the Fabry-Perot interferometer, the cavity tuning control subsystem (essential to compensate the relative frequency drifts between the laser and the filter), the elements for guiding and conditioning the light beams, the signal detection and amplification modules or the routines for calibrating and controlling the system and for processing the information. The prototype implemented to achieve these objectives is designed to measure the speed of hard targets using a laser emitting in continuous-wave regime. These operating conditions allow avoiding some difficulties related with the use of pulsed atmospheric lidar signals: in the first place, their duration is very short and their power is neither constant nor predictable; furthermore, it is not easy to obtain independent values of the speed of the wind for assessing the quality of the measurements.
CitationMuñoz Porcar, C. Analysis and design of an edge-technique-based Doppler wind lidar: practical assessment of a laboratory prototype. Tesi doctoral, UPC, Departament de Teoria del Senyal i Comunicacions, 2013. Available at: <http://hdl.handle.net/2117/94899>
URIhttp://hdl.handle.net/2117/94899
DLB. 18240-2013
Collections
Share: