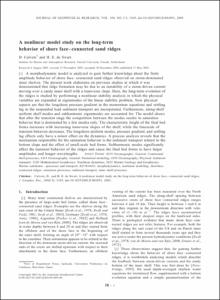 Swart, Huib E. de
Document typeArticle
Rights accessOpen Access
Abstract
A morphodynamic model is analyzed to gain further knowledge about the finite amplitude behavior of shore face–connected sand ridges observed on storm-dominated inner shelves. The present work elaborates on previous studies in which it was demonstrated that ridge formation may be due to an instability of a storm-driven current moving over a sandy inner shelf with a transverse slope. Here, the long-term evolution of the ridges is studied by performing a nonlinear stability analysis in which the physical variables are expanded in eigenmodes of the linear stability problem. New physical aspects are that the longshore pressure gradient in the momentum equations and settling lag in the suspended load sediment transport are incorporated. Furthermore, along-shelf uniform shelf modes and subharmonic eigenmodes are accounted for. The model shows that after the transient stage the competition between the modes results in saturation behavior that is dominated by a few modes only. The characteristic height of the final bed forms increases with increasing transverse slopes of the shelf, while the timescale of transient behavior decreases. The longshore uniform modes, pressure gradient, and settling lag effects only have a minor effect on the dynamics. A process analysis reveals that the mechanism responsible for the saturation behavior is the sediment transport related to the bottom slope and the effect of small-scale bed forms. Subharmonic modes significantly affect the transient behavior of the ridges and cause the final bed forms to have larger amplitudes and longer wavelengths.
CitationCalvete, D.; Swart, H. A nonlinear model study on the long-term behaviour of shore face-connected sand ridges. "Journal of geophysical research", Maig 2003, vol. 108, núm. C5, 3169, p. 1-15.
URIhttp://hdl.handle.net/2117/9486
DOI10.1029/2001JC001091
ISSN0148-0227
Collections
Share: