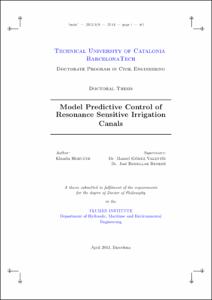 Chair / Department / Institute
Universitat Politècnica de Catalunya. Departament d'Enginyeria Hidràulica, Marítima i Ambiental
Document typeDoctoral thesis
PublisherUniversitat Politècnica de Catalunya
Rights accessOpen Access
Abstract
Saving water is an economic and ecological need. One way to save water is to reduce losses in irrigation networks by canal automation. The goal of canal automation is to make the right amount of water to at arrive in the right time. In order to achieve this goal, one of the ways is controlling the gates in the irrigation network by some control algorithm. In this work the control of a specific type of canal pools is studied: short and flat pools that are prone to resonance. The downstream water level control of this type of canals is investigated using the example of the 3-reach laboratory canal of the Technical University of Catalonia. Numerical and experimental studies are carried out to investigate the following: the choice of models for predictive control, the possibility to achieve offset-free control while using gravity offtakes and the best choice of control action variables. The objective of this work is to develop a well performing centralized model predictive controller (MPC) for the laboratory canal that is able to handle known and unknown setpoint changes and disturbances, and also to draw further conclusions about controller design for this type of canals. A recently developed model for resonant canals, the Integrator Resonance, is implemented and successfully tested experimentally for the first time. A new method to achieve offset free control for model predictive control is developed and tested numerically and experimentally. A choice of control variables are tested: As opposed to the discharge which is generally used as the control action variable, a state space model is formulated by using the gate opening as control variable without the need of water level measurement downstream of the gates. The results are summarized and conclusions are presented for control of short and flat canals that are prone to resonance.
CitationHorváth, K. Model predictive control of resonance sensitive irrigation canals. Tesi doctoral, UPC, Departament d'Enginyeria Hidràulica, Marítima i Ambiental, 2013. Available at: <http://hdl.handle.net/2117/94852>
URIhttp://hdl.handle.net/2117/94852
DLB. 16904-2013
Collections
Share: