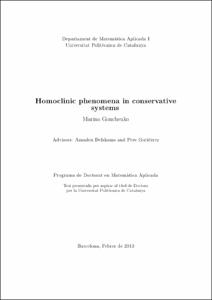 ; Pérez Gutiérrez, Pere
Chair / Department / Institute
Universitat Politècnica de Catalunya. Departament de Matemàtica Aplicada I
Document typeDoctoral thesis
PublisherUniversitat Politècnica de Catalunya
Rights accessOpen Access
Abstract
The goal of this thesis is the study of homoclinic orbits in conservative systems (area-preserving maps and Hamiltonian systems). We consider homoclinic (bi-asymptotic) orbits either to saddle periodic orbits or to whiskered tori. Such type orbits, called homoclinic by Poincaré, are of great interest in the theory of dynamical systems since their presence implies complicated dynamics. The thesis is divided in two parts according to two quite different topics considered. In the first part, we study area-preserving maps (APMs) with a nontransversal homoclinic orbit (homoclinic tangency) to a saddle fixed point in order to know the behavior of orbits near the given homoclinic trajectory. To this end, we construct first return maps, for which we use finitely-smooth normal forms of the saddle maps and introduce cross-coordinates. The fixed points of the first return maps correspond to single-round periodic orbits of the maps under consideration. Applying rescaling methods we derive the first return maps to the Hénon-like maps whose bifurcations are well known. Thus, translating the results obtained for the fixed points of the return maps to the periodic orbits, we prove the existence of cascades of elliptic periodic points. We also study the phenomenon of the coexistence of infinitely many single-round periodic orbits of different large periods (called global resonance). We consider the related problems in different types of APMs (symplectic maps and non-orientable APMs) with quadratic or cubic tangencies. We also establish the structure of 1:4 resonance for some conservative Hénon-like maps. The second part of the thesis is dedicated to the study of exponentially small splitting of separatrices arising from a perturbation of a Hamiltonian system with a homoclinic connection (separatrix). We consider a perturbation of an integrable Hamiltonian system having whiskered tori with coincident stable and unstable whiskers. Generally, in the perturbed system, the whiskers do not coincide anymore and our goal is to detect the transverse homoclinic orbits associated to the persistent whiskered tori. The perturbed system turns out to be not integrable due to the presence of these homoclinic trajectories and, consequently, there is chaotic dynamics near them. We give a suitable parametrization to the whiskers to determine the distance between them. This distance is given by the splitting function, and the simple zeros of this function give rise to transverse homoclinic orbits. We use the classical Poincaré-Melnikov approach to measure the splitting, although in the case of exponential smallness we have to ensure that the first order approximation overcome the error term. We consider Hamiltonian systems possessing two-dimensional whiskered tori with quadratic frequencies and three-dimensional whiskered tori with cubic golden frequency. In the two-dimensional case, we find 23 new quadratic numbers for which the Poincaré-Melnikov method can be applied and establish the existence of 4 transverse homoclinic orbits. We also study the continuation of the homoclinic orbits for all values of the parameter of perturbation in the case of the silver number sqrt(2)-1. For the three-dimensional whiskered torus with frequency vector given by the so-called "cubic golden number", we establish the existence of exponentially small splitting of separatrices and detect the transversality of 8 homoclinic orbits.
CitationGonchenko, M. Homoclinic phenomena in conservative systems. Tesi doctoral, UPC, Departament de Matemàtica Aplicada I, 2013. Available at: <http://hdl.handle.net/2117/94851>
URIhttp://hdl.handle.net/2117/94851
DLB. 16900-2013
Collections
Share: