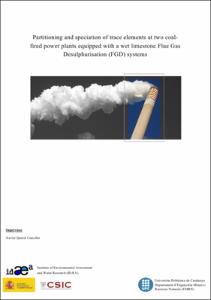 Show full item record
Córdoba Solà, Patricia
Tutor / directorQuerol Carceller, Xavier
Chair / Department / Institute
Universitat Politècnica de Catalunya. Departament d'Enginyeria Minera i Recursos Naturals
Document typeDoctoral thesis
PublisherUniversitat Politècnica de Catalunya
Rights accessOpen Access
Abstract
Coal-fired power plants are a major source of emissions for a number of air pollutants including SO2, NOx, particulate matter (PM), HCl, HF, and Hg amongst. In this work, intensive sampling campaigns were carried out at two power plants in Spain in 2007 and 2008 to study the fate of trace elements. Input and output flows were sampled in the coal combustion unit (boiler and Electrostatic Precipitator (ESP)) and in the Flue Gas Desulphurisation (FGD) system. Analyses of solid, water, gaseous, and PM samples, mass balance calculations and studies on partitioning for trace elements were conducted for the Pulverised Coal Combustion, FGD systems, and for the whole installation (PCC+FGD). Desulphurisation efficiency and emission abatement capacity for inorganic trace pollutants at both power plants was also assessed on the basis of these results. Results revealed (1) an unusual speciation of Hg in the outgoing gaseous stream of the flue gas desulphurisation (OUT-FGD) system at the two power plants: Hg0 was the dominant Hg OUT-FGD species at PP1, and Hg2+ at PP2; (2) a different retention of gaseous Hg between the two sampling campaigns at the coal-fired power plant under co-combustion conditions: a higher retention of Hg2+ in 2007 (73%) than in 2008 (24%) at PP2; (3) a high concentration of trace pollutants and a distinctive behaviour of some elements in the waters of re-circulation to the scrubber at both power plants: Al, F, and SO42 presented a higher concentration in the 2007 gypsum slurry than at PP2 in 2008 and that at PP1; and (4) a characteristic leaching behaviour of some elements from FGD-gypsum: insignificant leaching of heavy metals from FGD-gypsums was found at PP2. The behaviour of Se proved to be the inverse. Laboratory experiments were conducted to reproduce the differences in speciation of gaseous Hg OUT-FGD with respect to that detected at industrial scale. Thermodynamic modelling tools were employed to study the causes of the different retention and speciation of gaseous Hg OUT-FGD and causes and effects of the high concentration of elements in the waters of re-circulation. Potentiometric titration experiments for FGD-gypsum samples were conducted to study the leaching behaviour of some elements from FGD-gypsum. Laboratory experiments confirmed Hg0 as the dominant species in the OUT-FGD gas at PP1, and Hg2+ at PP2. The gaseous speciation of Hg2+ OUT-FGD at PP2 in 2007 and in 2008 was caused by the high concentration of HCl and Hg in the IN-FGD gaseous stream. The unusual speciation of Hg2+ OUT-FGD at PP2 was probably due to the evaporation of HgCl2 particles from the gypsum slurry in the OUT-FGD gas. The Al-additive used at PP2 was responsible for the higher retention of gaseous Hg in 2007 than in 2008. The enrichment of inorganic trace pollutants in the re-circulated water streams at PP1 and PP2 resulted from the continuous re-circulation of filtered water to the scrubber. The emission of the enriched elements by entraining particles and droplets of gypsum slurry OUT-FGD was the most significant consequence of such a fact. Thermodynamic modelling revealed that the Al-additive i) increased the concentration of F- in filtered waters at PP2 in 2007, ii) gave rise to the differential behaviour and enrichment of Al, F, SO42-, Mg, and U in gypsum slurries and filtered waters, iii) led to the formation of SO42- complexes with metals increasing their concentrations in the gypsum slurry from PP1 to PP2-2008 and 2007, iv) caused the acidification of gypsum slurry from PP2 via aluminium hydrolysis, and v) induced the protonation of the PP2 FGD-gypsum surfaces. The relatively high leaching values of Se and the absence of significant leaching of heavy metals from the PP2 FGD-gypsums resulted from the protonation of the surface of the FGD-gypsum and the formation of SO4-complexes.
Description
Premi extraordinari doctorat curs 2012-2013, àmbit d’Enginyeria Industrial
CitationCórdoba Solà, P. Partitioning and speciation of trace elements at two coal-fired power plants equipped with a wet limestone flue gas desulphurisation (FGD) system. Tesi doctoral, UPC, Departament d'Enginyeria Minera i Recursos Naturals, 2013. Available at: <http://hdl.handle.net/2117/94850>
Award-winningAward-winning
URIhttp://hdl.handle.net/2117/94850
DLB. 16894-2013
Collections
Share: