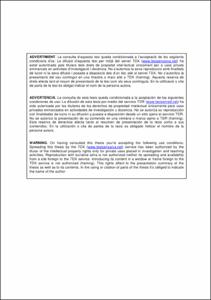 Chair / Department / Institute
Universitat Politècnica de Catalunya. Departament d'Enginyeria de Sistemes, Automàtica i Informàtica Industrial
Document typeDoctoral thesis
PublisherUniversitat Politècnica de Catalunya
Rights accessOpen Access
Abstract
SAHS (Sleep Apnea-Hypopnea Syndrome) is recognized to be a serious disorder with high prevalence in the population. The main clinical triad for SAHS is made up of 3 symptoms: apneas and hypopneas, chronic snoring and excessive daytime sleepiness (EDS). The gold standard for diagnosing SAHS is an overnight polysomnographic study performed at the hospital, a laborious, expensive and time-consuming procedure in which multiple biosignals are recorded. In this thesis we offer improvements to the current approaches to diagnosis and assessment of patients with SAHS. We demonstrate that snoring and arousals, while recognized key markers of SAHS, should be fully appreciated as essential tools for SAHS diagnosis. With respect to snoring analysis (applied to a 34 subjects¿ database with a total of 74439 snores), as an alternative to acoustic analysis, we have used less complex approaches mostly based on time domain parameters. We concluded that key information on SAHS severity can be extracted from the analysis of the time interval between successive snores. For that, we built a new methodology which consists on applying an adaptive threshold to the whole night sequence of time intervals between successive snores. This threshold enables to identify regular and non-regular snores. Finally, we were able to correlate the variability of time interval between successive snores in short 15 minute segments and throughout the whole night with the subject¿s SAHS severity. Severe SAHS subjects show a shorter time interval between regular snores (p=0.0036, AHI cp(cut-point): 30h-1) and less dispersion on the time interval features during all sleep. Conversely, lower intra-segment variability (p=0.006, AHI cp: 30h-1) is seen for less severe SAHS subjects. Also, we have shown successful in classifying the subjects according to their SAHS severity using the features derived from the time interval between regular snores. Classification accuracy values of 88.2% (with 90% sensitivity, 75% specificity) and 94.1% (with 94.4% sensitivity, 93.8% specificity) for AHI cut-points of severity of 5 and 30h-1, respectively. In what concerns the arousal study, our work is focused on respiratory and spontaneous arousals (45 subjects with a total of 2018 respiratory and 2001 spontaneous arousals). Current beliefs suggest that the former are the main cause for sleep fragmentation. Accordingly, sleep clinicians assign an important role to respiratory arousals when providing a final diagnosis on SAHS. Provided that the two types of arousals are triggered by different mechanisms we hypothesized that there might exist differences between their EEG content. After characterizing our arousal database through spectral analysis, results showed that the content of respiratory arousals on a mild SAHS subject is similar to that of a severe one (p>>0.05). Similar results were obtained for spontaneous arousals. Our findings also revealed that no differences are observed between the features of these two kinds of arousals on a same subject (r=0.8, p<0.01 and concordance with Bland-Altman analysis). As a result, we verified that each subject has almost like a fingerprint or signature for his arousals¿ content and is similar for both types of arousals. In addition, this signature has no correlation with SAHS severity and this is confirmed for the three EEG tracings (C3A2, C4A1 and O1A2). Although the trigger mechanisms of the two arousals are known to be different, our results showed that the brain response is fairly the same for both of them. The impact that respiratory arousals have in the sleep of SAHS patients is unquestionable but our findings suggest that the impact of spontaneous arousals should not be underestimated.
CitationMesquita, J.M.G. de. Snoring and arousals in full-night polysomnographic studies from sleep apnea-hypopnea syndrome patients. Tesi doctoral, UPC, Departament d'Enginyeria de Sistemes, Automàtica i Informàtica Industrial, 2013. Available at: <http://hdl.handle.net/2117/94849>
URIhttp://hdl.handle.net/2117/94849
DLB. 16915-2013
Collections
Share: