Characterization and modelling of SFRC elements 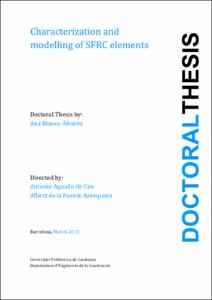 The use of fibre reinforced concrete (FRC) as a construction material has expanded beyond the traditional applications since the publication of design codes and guidelines. In fact, the industry is demanding FRC with increasing structural responsibilities and, in some cases, with the fibres as the only reinforcement. Despite the remarkable advances in the fibre reinforcement technology and the publication of design guidelines, questions continue to arise regarding the performance, the characterization and the modelling of the material. The definition of the constitutive model of FRC and the development of methods for the characterization have been extensively studied. However, their adequacy for certain applications still remains an issue. Moreover, properties such as the fibre orientation and the creep behaviour are not minor concerns and need to be properly considered. These subjects require further research in order to work towards an accurate and efficient design procedure. In this context, the great interest of the industry to understand better FRC behaviour has created the opportunity of performing small-scale and real-scale tests that are a valuable source of information. Therefore, a rather generalist doctoral thesis covering several subjects about the characterization and modelling of steel fibre reinforced concrete (SFRC) elements is proposed. The subjects addressed in this research refer to the flexural behaviour and modelling of RC-SFRC beams (beams with combined reinforcement of steel fibres and rebars); the flexural behaviour, fibre orientation and modelling of SFRC slabs with changing dimensions; the prediction of the tensile behaviour of SFRC and the post-cracking creep behaviour of SFRC. The first subject concerns the adequacy of the constitutive models proposed in the current European codes and guidelines to model the flexural response of RC-SFRC beams. For that, real-scale elements with different steel fibres and fibre contents were tested. The results of the numerical modelling show that, in general, these constitutive models reproduce satisfactorily the experimental data. In the second subject, based on the flexural behaviour of real-scale SFRC slabs, geometry factors are proposed to compensate for the inaccuracies of the current constitutive models to reproduce the response of such elements. The study conducted on the modelling of the flexural behaviour of the slabs allowed identifying a favourable effect of the fibre orientation (fibre network effect) as the width of the slabs increased. The third subject covers a proposal of an analytical formulation to estimate the tensile stress-strain diagram of FRC from the results of the Barcelona test. The validation performed indicates the applicability of the new model to concrete with either steel fibres or plastic fibres. The last subject focuses on the post-cracking creep behaviour of SFRC, which is assessed by performing flexural tests under sustained load on pre-cracked small-scale beams. Based on the results, a simple model to predict the evolution of the creep coefficient with time is proposed.
CitationBlanco Álvarez, A. "Characterization and modelling of SFRC elements". Tesi doctoral, UPC, Departament d'Enginyeria de la Construcció, 2013. Available at: <http://hdl.handle.net/2117/94843>
URIhttp://hdl.handle.net/2117/94843
DLB. 16890-2013