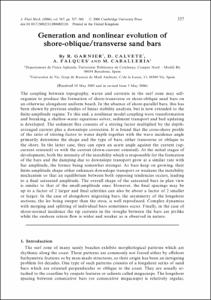 The coupling between topography, waves and currents in the surf zone may self-organize to produce the formation of shore-transverse or shore-oblique sand bars on an otherwise alongshore uniform beach. In the absence of shore-parallel bars, this has been shown by previous studies of linear stability analysis, but is now extended to the finite-amplitude regime. To this end, a nonlinear model coupling wave transformation and breaking, a shallow-water equations solver, sediment transport and bed updating is developed. The sediment flux consists of a stirring factor multiplied by the depth-averaged current plus a downslope correction. It is found that the cross-shore profile of the ratio of stirring factor to water depth together with the wave incidence angle primarily determine the shape and the type of bars, either transverse or oblique to the shore. In the latter case, they can open an acute angle against the current (up-current oriented) or with the current (down-current oriented). At the initial stages of development, both the intensity of the instability which is responsible for the formation of the bars and the damping due to downslope transport grow at a similar rate with bar amplitude, the former being somewhat stronger. As bars keep on growing, their finite-amplitude shape either enhances downslope transport or weakens the instability mechanism so that an equilibrium between both opposing tendencies occurs, leading to a final saturated amplitude. The overall shape of the saturated bars in plan view is similar to that of the small-amplitude ones. However, the final spacings may be up to a factor of 2 larger and final celerities can also be about a factor of 2 smaller or larger. In the case of alongshore migrating bars, the asymmetry of the longshore sections, the lee being steeper than the stoss, is well reproduced. Complex dynamics with merging and splitting of individual bars sometimes occur. Finally, in the case of shore-normal incidence the rip currents in the troughs between the bars are jet-like while the onshore return flow is wider and weaker as is observed in nature.
CitationGarnier, R. [et al.]. Generation and nonlinear evolution os shore-oblique/transverse sand bars. "Journal of fluid mechanics", Novembre 2006, vol. 567, p. 327-360.
URIhttp://hdl.handle.net/2117/9484
DOI10.1017/S0022112006002126
ISSN0022-1120
Publisher versionhttp://journals.cambridge.org/action/displayAbstract?aid=523880