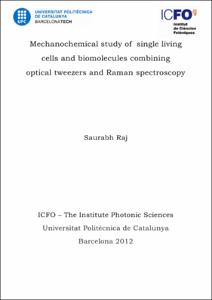 Mostra el registre d'ítem complet
Raj, Saurabh
Tutor / directorPetrov, Dimitri
Càtedra / Departament / Institut
Universitat Politècnica de Catalunya. Institut de Ciències Fotòniques
Tipus de documentTesi
EditorUniversitat Politècnica de Catalunya
Condicions d'accésAccés obert
Abstract
This thesis is devoted to the study of mechanochemistry of single cells and single biomolecules. Mechanochemistry relates to the association of mechanical and chemical occurrence at the molecular level. Using a combination of microrheological measurements and Raman spectroscopy based on optical tweezers we have shown how the molecular structures of single living cells and biomolecules are coupled with mechanical deformations. The basic questions to respond in this work are: (i) How does a cell or a biomolecule detect an external force? (ii) How do the viscoelastic properties of living cells and biomolecules depend on its environment? (iii) How does the structure of the cell or biomolecules change because of the external force? We use microrheology to detect the response of single cells (or biomolecules) to an external force. Two point microrheology is applied to study these samples - both in their relax configuration and in a stress situation when a known external force is applied. We are able to find non-linearities in mechanical response of RBC and DNA molecules subjected to an external load. In both the cases, an increase in elastic stiffness of the system is observed with increase in the force. To detect changes in the molecular structures of DNA or a cell as a result of an applied mechanical load, Raman spectroscopy is used. Raman signals from biomolecules are rich and complex in nature and are accompanied with several noises. Hence processing of data is an important aspect in Raman spectroscopy. For gaining in-depth information regarding the behavior of the molecule under study, we used statistical techniques such as principal component analysis and 2D correlation spectroscopy. Raman measurement of single DNA, with excitation optical beam focused by conventional optics, is almost impossible owing to very small thickness of DNA and inherent low efficiency of Raman scattering. To overcome this difficulty, we used additional optical phenomena - Surface Enhanced Raman Scattering (SERS) technique. With implementation of SERS, we were able to detect signals from single DNA molecule. Our study presents substantial findings that describe the structural changes of the phosphate backbone when DNA is extended in the entropic force regime. The current belief is that such forces are balanced by lowering DNA entropy via unfolding as the molecule is extended. While this is accurate, we observe structural movement at the bond level when the single biomolecule is extended at these low forces. This revelation has never been measured directly or predicted theoretically. The result gives a different view of DNA mechanical properties. We confirm and substantiate our experimental results with molecular dynamics simulations.
CitacióRaj, S. Mechanochemical study of single living cells and biomolecules combining optical tweezers and raman spectroscopy. Tesi doctoral, UPC, Institut de Ciències Fotòniques, 2012. Disponible a: <http://hdl.handle.net/2117/94809>
URIhttp://hdl.handle.net/2117/94809
Dipòsit legalB. 14916-2013
Col·leccions
Comparteix: